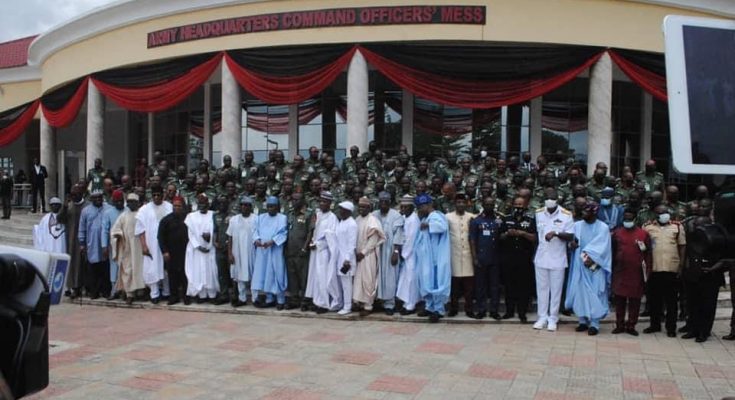 President Muhammadu Buhari has charged the Nigerian Army (NA) to remain resolute in tackling security challenges bedeviling the country. He gave the charge today, Tuesday 6 July 2021 at the grand finale of the Nigerian Army Day Celebration (NADCEL) 2021 during the Chief of Army Staff(COAS) Commendation Award and lectures series held at the Command Officers’ Mess 1, Asokoro, Abuja.

The President, who was represented by the Honourable Minister of Defence, Major General Bashir Magashi (Rtd), said the NA has remained a highly professional Army subordinated to democratic and civil authority, since the rebirth of democracy in 1999. He further stated that the increasing synergy among the Services in the military and other security agencies in the fight against criminality is yielding significant results.

Appreciating the NA for its resilience in confronting contemporary security challenges, the President reiterated his resolve to ensure that the NA gets the much needed support to enhance its operational efficiency.

President Buhari directed officers and soldiers of the NA to be proactive and evolve new strategies of winning the hearts and minds of the citizenry. He further urged the NA to adhere to the rules of engagement in its operational engagements and respect the fundamental human rights of the populace.

Earlier in his welcome address the COAS, Major General Faruk Yahaya noted that the NA is optimizing synergy among security agencies to rid the country of criminality. He further said the NA has been repositioned as an army ready to accomplish assigned missions within a joint environment. Through these efforts he noted, the activities of insurgents, terrorists, bandits and other criminal elements have been greatly decimated.

Major General Yahaya also noted that the NADCEL is necessary considering the imperative of the event to constantly remind citizens of the sacrifices made by the NA to keep Nigeria as one united entity.

The COAS also used the medium to congratulate the recipients of the COAS Commendation Awards, reinstating his resolve to continue to promote merit, celebrate gallantry and honour heroes. He also assured of his determination to bring back the glory of Regimental Sergeant Majors as custodians of discipline and regimentation in NA formations and units.

Highlights of the celebration were the COAS’ Commendation Awards to deserving officers and soldiers, who distinguished themselves in various fields of endeavours. The COAS also presented brand new Hilux vehicles to Regimental Sergeant Majors (RSM), as well as series of lectures delivered by erudite resource persons.

The event was well attended by members of the National Assembly, Chief of Defence Staff, Service Chiefs, Inspector General of Police, former Defence and Service Chiefs, as well as serving and retired senior military officers.