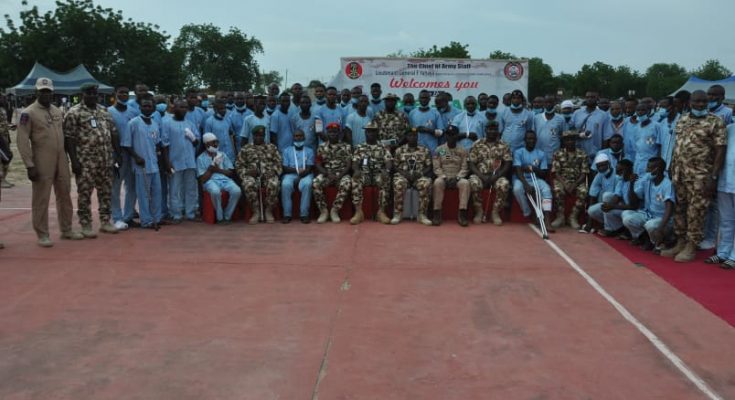 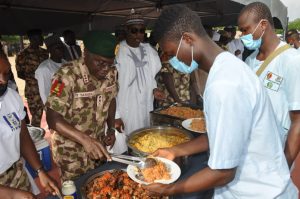 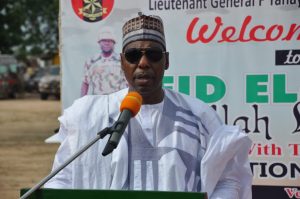 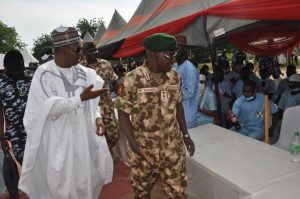 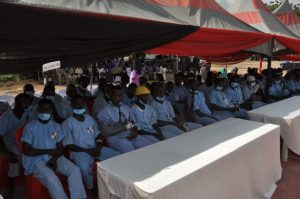 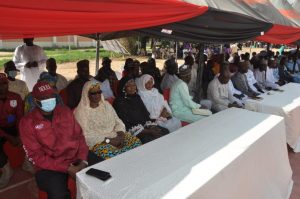 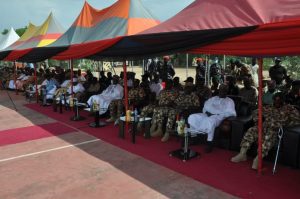 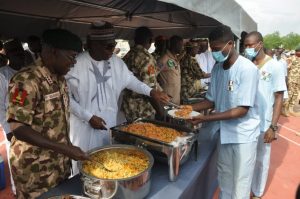 The Executive Governor of Borno State, Professor Babagana Umara Zulum has lauded troops of Operation HADIN KAI (OPHK) for their sacrifices and commitment in the war against terrorism and insurgency in the North East.

Governor ZULUM noted the continued improvement in the relationship between the military and civil authorities. He urged the military leadership to sustain the collaboration with Borno State Government in order fast track the end of terrorism and insurgency in the North East.

In his remarks, the Chief of Army Staff (COAS) Lieutenant General Faruk Yahaya stated that Eid El Kabir Festival provides a unique opportunity for troops to rededicate themselves, reflect on the objective of their operations and redouble their effort towards fulfilling the constitutional role of defending the territorial integrity of the country.

Gen Yahaya commended all officers and soldiers in the theatres of operations across the country, urging them to remain resilient in tackling the security challenges confronting the nation. He charged them to operate in synergy with the sister services, as well as other security agencies and stakeholders. He urged the troops to remain apolitical and professional in the discharge of their duties in the defence of the nation in conformity with the provisions of the Constitution of the Federal Republic of Nigeria.

Speaking further, the COAS reiterated his pledge to promote merit, recognize gallantry, celebrate excellence and honour heroic acts, adding that he will also not hesitate to punish indiscipline, indolence, negligence and all untoward acts. He pointed out that the effort is to revamp cherished customs, ethics and traditions of the Nigerian Army.

Gen Yahaya did not forget the fallen heroes, as he paid glowing tributes to all fallen heroes, who paid the supreme price in the fight to restore peace and tranquility in troubled parts of the country. He affirmed that the NA will ensure the comfort of their families, through prompt payment of all their entitlements, including medical bills and scholarship for the children they left behind.

The COAS also expressed appreciation to the Government and people of Borno State for all their support to the troops of OPHK.

Highlights of the event were, the presentation of welfare packages and serving of Sallah Lunch to recuperating troops by the Governor of Borno State, members of the National Assembly, the COAS, senior officers and other members of the State Executive Council.

Present at the event, were members of the National Assembly, Principal Staff Officers from Army Headquarters, members of the Borno State Executive Council, Formations and unit Commanders. Others are senior officers from Headquarters JTF NE OPHK and 7 Division, heads of security agencies, recuperating troops at the 7 Div Medical Services and Hospital, as well as troops of OPHK.