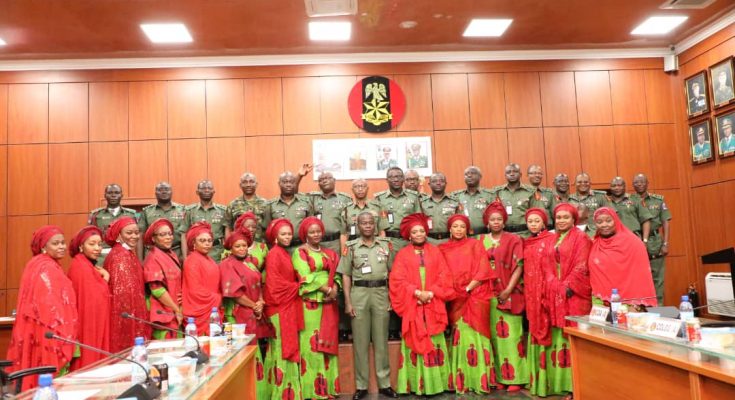 Jul 29, 2021Press ReleaseComments Off on NAOWA NATIONAL PRESIDENT CONGRATULATES COAS ON HIS APPOINTMENT…ASSURES HIM OF SUPPORT

The National President, Nigerian Army Officers’ Wives Association (NAOWA) has congratulated the Chief of Army Staff (COAS) Lt Gen Faruk Yahaya on his appointment as the 22nd COAS of the Nigerian Army.

Speaking when she led executive council members of the organisation on a courtesy call to the Army Headquarters, today Thursday 29 July 2021, the National President NAOWA, Mrs Salamatu Faruk Yahaya said the association will give the NA all the necessary support needed to succeed. She equally appealed for NA’s support to enable the organisation sustain its humanitarian activities across formations and units of the NA in order to bring succour to the less previleged in the society.

Mrs Salamatu Yahaya disclosed that members of the Association were at the Army Headquarters to further cement already existing cordial working relationship between NAOWA and the NA.

She emphasized that the Association needed the backing of the NA to achieve its objectives, adding that the support of the Army Headquarters is inevitable.
She expressed gratitude to the COAS for all the support so far provided to the organization, stressing that the good gesture of the COAS during the recently celebrated Nigerian Army Day Celebration went a long way in alleviating the suffering of over 284 widows and 5000 IDPs in various IDP camps across the country.

While praying God to give him the wisdom and strength to lead the NA in the right direction, Mrs Yahaha appealed to the COAS to also ensure the completion of the recently initiated NOAWA Wellness Center flagged off by the former National President of the Association, Mrs Fati Attahiru. She stated that when completed, the project would be dedicated to the late COAS and his wife.

Responding, the COAS Lt Gen Faruk Yahaya expressed gratitude to the National leadership and members of NAOWA for their visit, noting, that their numerous humanitarian engagements have impacted positively on the lives of many less privileged persons in the society. He urged them to sustain the good work in order to contribute their quota to the socio economic development of the nation. General Yahaya commended members of the Association for standing by their husbands and keeping the home front while their spouses engaged in service to the nation. He urged them to remain steadfast.

Highpoint of the visit was the presentation of souvenirs to NAOWA National President.