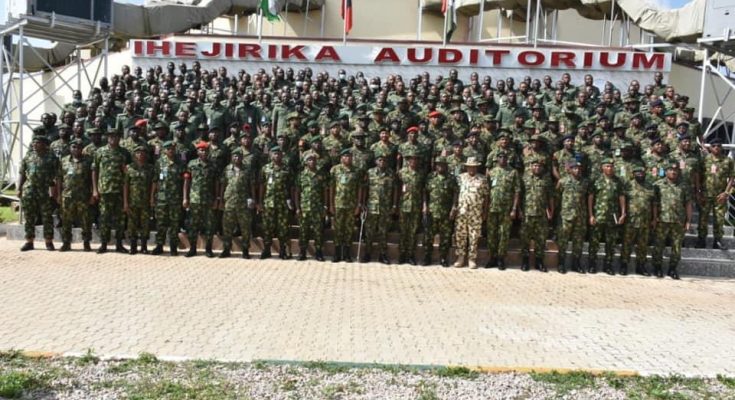 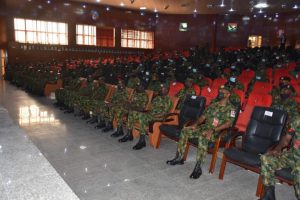 The Chief of Army Staff (COAS), Lieutenant General Faruk Yahaya today urged candidates of this year’s Senior Staff Course Qualifying Examination (SSCQE) to up the standard, as the Nigerian Army (NA) will always reward competence diligence and good conduct. The COAS expressed this, while addressing 257 Mid-level cadre officers of the NA between the ranks of Major and Captain, at the Ihejirika Auditorium, Jaji, Kaduna.

Lt Gen Yahaya observed that the exams will not only qualify the candidates for Senior Staff Course, but will also have a long term effect on their career. He therefore, urged them to effectively utilize the opportunity. The COAS averred that the Army will always place premium on competence, character and good conduct in its career progression examinations, such as the SSCQE.
The COAS used the occasion to commend the Commander Infantry Corps, Major General Victor Ezugwu and staff Officers of the Headquarters Infantry Corps Centre for the untiring effort demonstrated in hosting another successful SSCQE in Jaji.
In his remarks, the Exams President, who is the Commander Training and Doctrine Command (TRADOC) Major General Stevenson Olabanji assured that this year’s exams will bring out the best from the officers.

He pointed out that this year’s exams have been carefully prepared to depict real time scenarios in the country. He observed that the questions are domesticated, putting into consideration, the contemporary security challenges experienced in some parts of the country. He declared that the effort is to ensure that this crop of officers are better than they were, before writing the qualifying exams.