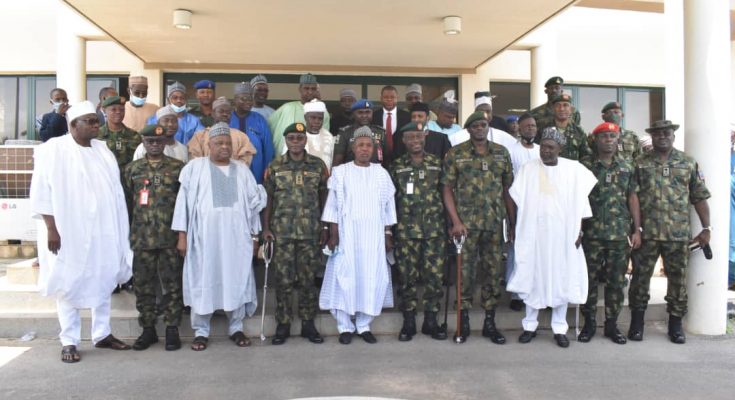 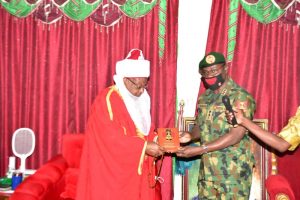 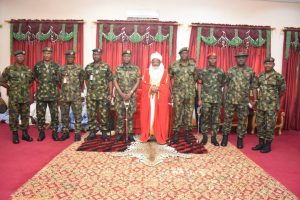 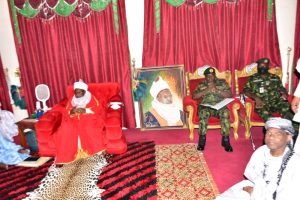 The Executive Governor of Katsina State, Right Honourable Aminu Bello Masari has called on all Nigerians, particularly those residing in the northwest to support ongoing anti banditry operations in North West Nigeria. The Governor made the appeal when the Chief of Army Staff (COAS), Lieutenant General Faruk Yahaya paid him a courtesy visit today Thursday 5 August 2021 at the Government House, Katsina. The COAS was on an operational tour of 8 Division, as well as formations and units under the Division’s area of responsibility.

Speaking further during the visit, Governor Masari observed that there had been significant improvement in the security situation of Katsina state. He however noted that the troops could do more, if given the necessary support by Nigerians.

While expressing appreciation to the military and security agencies, Governor Masari urged the troops to sustain the momentum of the ongoing operations, particularly in rural communities, adding that this is necessary to halt isolated cases of killings and abductions by bandits in those areas.

He reiterated the state government’s commitment and continued support to Nigerian Army (NA) and other security agencies in tackling security challenges in the state.

Delivering his remarks, the COAS expressed gratitude to the Governor and people of Katsina state for their support to the NA. He reassured of improved security in the state and the north west as a whole. Gen Yahaya reaffirmed his determination to enhance collaboration with the state government, as well as synergy with other security agencies in restoring peace and security in the region.

In a related development, the COAS was at the palace of His Royal Highness, the Emir of Katsina, Alhaji (Dr) Abdulmumini Kabir Usman, where he paid homage to the Royal father. He used the medium to call on other traditional rulers and critical stakeholders to assist security agencies with useful information that will support troops’ anti banditry operations.

The COAS has also assured troops of his readiness to support ongoing operations with requisite logistics and other necessities to enhance the conduct of their operations. General Yahaya gave the assurance at the Headquarters 17 Brigade, while addressing officers and soldiers of the formation during his operational tour. He encouraged the troops to remain steadfast in carrying out their duties in the service to the nation in conformity with the constitutional mandate of the NA. He declared that while he will make it a point of duty to reward diligence, galantry and good conduct; he will not hesitate to punish indolence and bad conduct.