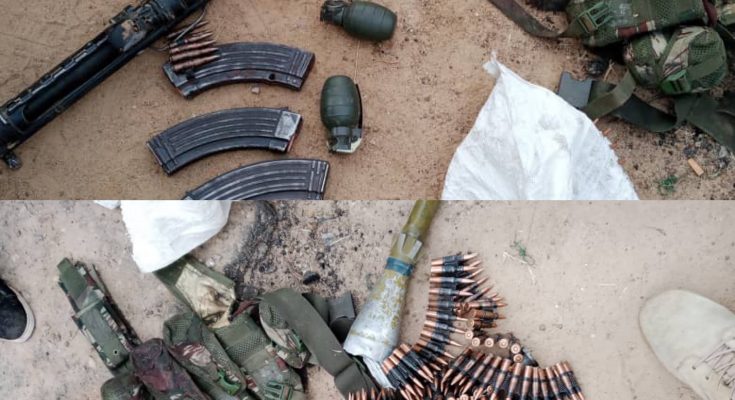 Troops of Sector 2 Joint Task Force North East, Operation HADIN KAI have neutralised two Islamic State West Africa Province/ Boko Haram insurgents during a counter attack by troops responding to insurgents’ infiltration attempt into Babangida community in Tarmuwa Local Government Area of Yobe State, on Sunday 26 September 2021. Owing to the logistics blockade imposed on the insurgents, the criminals now desperately indulge in pillaging activities in order to replenish their dwindling logistics. The insurgents made futile effort to infiltrate and pillage the community, but were met with a fierce counter attack by the vigilant troops, forcing them to withdraw in disarray, leaving traces of blood littering their route as they fled.

Aside inflicting casualty on the insurgents, the gallant troops also captured one BHT/ISWAP Heckler and Koch 21 Guns, Three AK 47 rifle magazines, 213 links of 7.62mm (NATO) and two grenades. Further exploitation by the troops is still ongoing.

The troops have been commended by the Chief of Army Staff, Lt Gen Faruk Yahaya for their doggedness in expeditiously conducting the counter attack. He also encouraged them to remain resolute in the ongoing operations against the insurgents.

We enjoin law-abiding people of Yobe State and the North East in general to remain assured of troops’ determination to rout the Boko Haram/Islamic State West Africa Province terrorists from their hideouts. They are also encouraged to continue to avail troops with actionable information that would enhance execution of ongoing Counter Terrorism Counter Insurgency operations in the region.