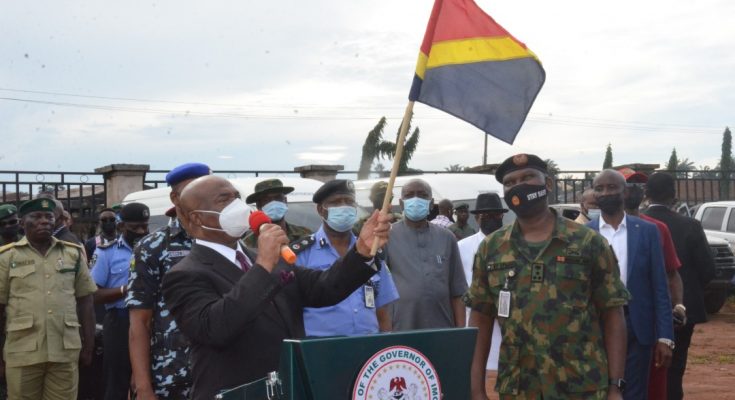 The Governor of Imo state, Senator Hope Uzodinma has called on the Nigerian Army troops to target criminal elements in the state and ensure they are brought to justice. Governor Uzodinma stated this while flagging-off Exercise GOLDEN DAWN at 34 Artillery Brigade Forward Operation Base at Orlu, Imo State on Wednesday 6 October 2021.

The Governor noted that the Army, sister services and other security agencies must continue to consolidate on the gains so far made in curbing the activities of criminals who are hell bent on causing pain and hardship on the people adding that exercises such as this will greatly destabilize and bring to a halt the activities of hoodlums, kidnappers, cultists among other criminal elements.

He assure that the state will continue to support the Army, sister services and all other security agencies who strive to ensure that there is peace in Imo. He commended the Chief of Army Staff Lt Gen Faruk Yahaya, the Commander 34 Artillery Brigade and his officers and soldiers for their sacrifices in ensuring a peaceful Imo.

Earlier in his welcome address, the Commander 34 Artillery Brigade, Brigadier General Raymond Utsaha explained that EXERCISE GOLDEN DAWN is a Nigerian Army exercise aimed at emplacing measures to curb the activities of criminal elements during and after the Yuletide season to guarantee public safety and continuity of socio-economic activities. The exercise is also geared towards consolidating the ongoing operations against the proscribed terrorist groups within Imo State in particular and South East in general.

Previous PostCOAS CHARGES TROOPS TO BE ALERT AND VIGILANT IN DISCHARGING THEIR DUTIES Next PostDISCLAIMER RE - NIGERIAN ARMY MANDATES SOLDIERS VISITING FAMILIES TO BRING 6,000 TORCHES BEFORE TRAVELING