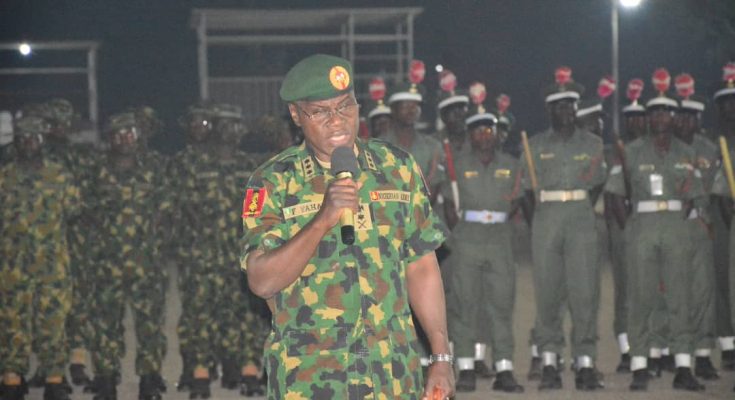 Oct 08, 2021Press ReleaseComments Off on COAS CHARGES TROOPS TO BE ALERT AND VIGILANT IN DISCHARGING THEIR DUTIES

The Chief of Army Staff (COAS), Lieutenant General Faruk Yahaya has charged troops to be alert and vigilant while discharging their duties. He gave the charge while addressing instructors at Depot Nigerian Army, Nigerian Military School (NMS), Directorate of Army Physical Training (DAPT), and Army School of Physical Training (ASPT).

General Yahaya reiterated that, the current security challenges call for all to be vigilant, urging them to conduct themselves professionally, while adhering to the rules of engagement and standard operating procedures.

The COAS reassured the troops that since assumption of Command, he places high premium on the welfare of officers, soldiers and their families, adding that delibrate steps are taken to address the challenges associated with accommodation in Chindit Cantonment. He further stated that in demonstration of his resolve that he has embarked on the assessment visit to obtain first hand information on the level of renovation work going on in the cantonment. He restated that welfare will continue to be given the desired attention under his watch.

He commended troops for their selfless service and urged them to keep the flag flying in defence of fatherland and service to humanity. This he said is necessary to justify the confidence the President, Commanderi-in-Chief reposes on the Armed Forces of Nigeria.

On arrival at the Cantonment, the COAS was received by the Commandant Depot Nigerian Army, Brigadier General Aminu Chinade at the Buffalo Haven, who briefed him on the security situation as well as the state of development in the cantonment and its environs.