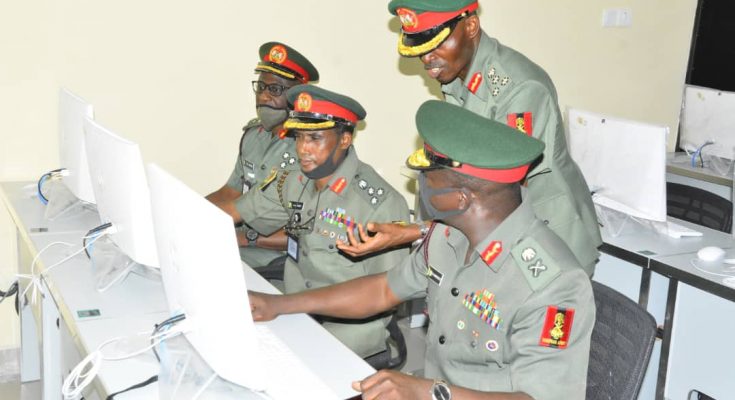 Oct 09, 2021Press ReleaseComments Off on MODERN BATTLE NOT LIMITED TO LAND, AIR AND MARITIME DOMAIN – COAS 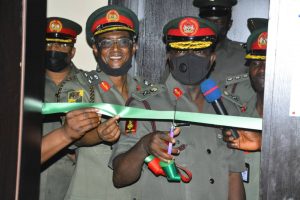 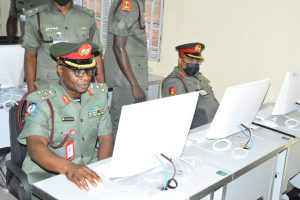 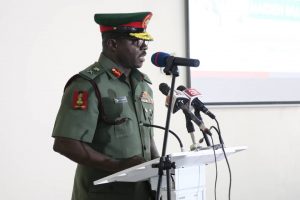 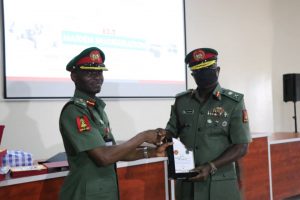 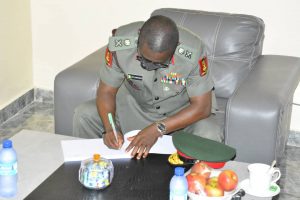 The Chief of Army Staff (COAS), Lieutenant General Faruk Yahaya has said that modern battles are no longer fought only on land, sea and air, as warfare have been taken to the cyberspace. He made this known while inaugurating the maiden Digital Literacy Internet and Core Computing Certification Course (IC3) and the establishment of the Nigerian Army Cyber Warfare School (NACWS) Basic Cyber Laboratory on Friday 8 October 2021 at Giri, Abuja.

The COAS, who was represented by the Director General, Land Forces Simulation Centre, Major General Felix Omoigui said this development has brought to the fore, the need to properly defend the territorial integrity of the nation in the cyberspace. Hence, the establishment of the Nigerian Army Cyber Warfare Command (NACWC).

According to him, NACWC and other cyber affiliated formations were established to combat cyber threats and cybercrimes within the Nigerian Army sphere of influence. However, he said there is need for requisite manpower to effectively operate in that space. This he further said, is necessary to build capacity that will enhance the proficiency of personnel to counter these threats. He noted that to this end, NACWS among other roles, was established to provide specialist training for cyber warriors, aimed at inducting trained cybersecurity specialists to the NACWC and other cyber affiliated formations in support of Nigerian Army operations.

The Army Chief stated that the course was designed to equip the participants with basic competencies required to manipulate current and future Information Communication Technology (ICT) infrastructure.

General Yahaya added that the nation’s security dynamics imply that efforts must be re-doubled with needed cyber products and competencies to defeat all forms of cyber threats confronting the nation. He charged personnel across board to be resolute and patriotic in discharging their responsibilities in service to the nation and humanity.

He commended the Commandant of the school, Brigadier General Adewale Adetoba for the establishment of Basic Cyber Laboratory in the school, reiterating that it is a step in the right direction. This he said will lead to the actualization of the mandate of the school.

The Commandant, Brigadier General Adewale Adetoba while addressing the participants, disclosed that the course was the first of its kind, aimed at developing the capacity and improving the skills of Nigerian Army personnel on cyber related activities, in line with the vision of the COAS in tackling various security challenges confronting the country.

The Commandant disclosed that the IC3 course had a total of 30 students drawn from various units within Abuja, adding that it was a global benchmark for basic computer literacy and specialist certification. He implored the participants to take the course seriously, so as to imbibe the expertise that would improve their performances in their respective formations and units.

Previous PostDISCLAIMER: ARMY IS NOT CONSTRUCTING RUGA SETTLEMENT IN ANY PART OF SOUTH EAST Next PostTROOPS' NEUTRALISE THREE UNKNOWN GUNMEN IN A SHOOTOUT