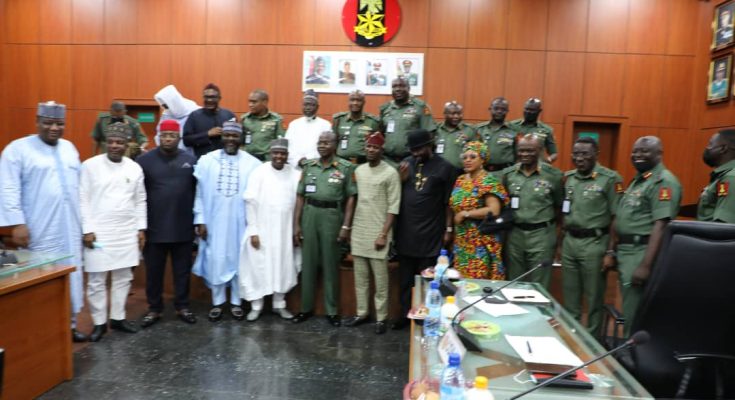 Oct 15, 2021Press ReleaseComments Off on HOUSE OF REP COMMITTEE ON ARMY SUPPORT OPERATIONALIZATION OF NA AVIATION

The Chairman House Committee on Army, Honourable Abdulrazak Namdas has expressed the support of the House of Representatives Committee on Army for the operationalization of the Nigerian Army Aviation. He stated this when he led other members on a visit to the Army Headquarters, Abuja. today, Thursday 14 October 2021. The visit was part of the committee’s oversight function.

Honourable Namdas said the security of lives and property is crucial to President Muhammadu Buhari, hence the committee embarked on this legislative duty to ascertain if resources appropriated to the Nigerian Army (NA) in the 2021 budget have been utilized effectively.

He further stated that the oversight activities of the committee, avail them the opportunity to appraise ongoing operationsand its challenges, with a view to prioritizing NA’s requirements in subsequent budgets.

The committee also lauded the recent recruitment exercise conducted by the NA at Falgore Forest, Kano State, under the leadership of the COAS, describing it as as a fair and transparent exercise.

While commenting on the ongoing operations across the country, the Chairman pointed out that the NA has recorded enormous success across various theatres of operations in the country. He added that the exercises recently launched by the COAS to stem the tide insecurity in the South South, South East, South West and North Central parts of the country have began yielding positive results.

He particularly commended the synergy demonstrated in the conduct of joint operations by the NA, other sister services and security agencies, noting, that it is the way to go in modern operations.

Responding, the COAS commended the Committee for the visit, noting that it will further crystalize the cordial relationship between the NA and the House of Representatives.

He used the opportunity to emphasize the operational significance of NA Aviation, adding that the NA under his watch will continue to leverage the support of the National Assembly to bring this to fruition.

The COAS re-echoed the NA’s zero tolerance for human rights abuse, as well as adherence to rules of engagements in all its operations. He averred that under his watch, troops must continue to conduct themselves in the most professional manner in line with global best practices.