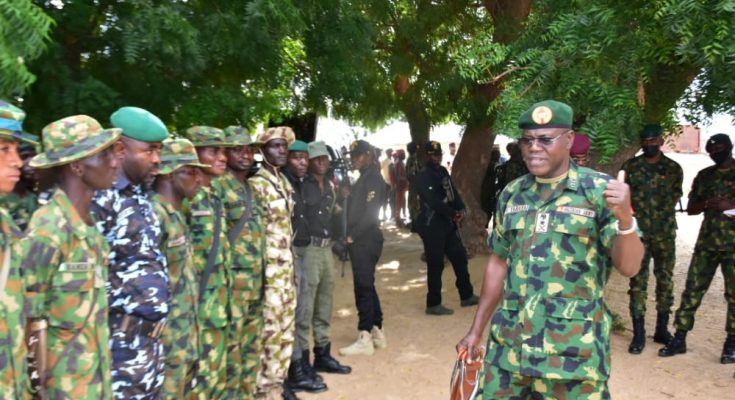 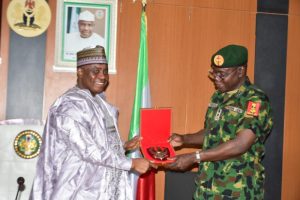 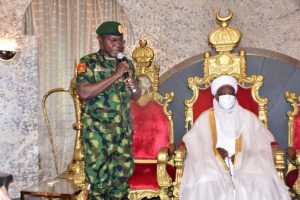 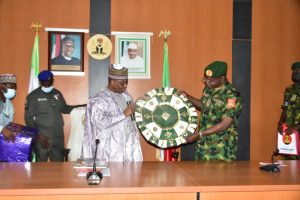 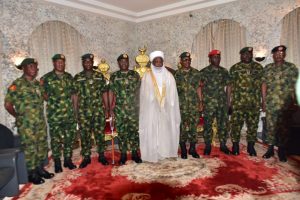 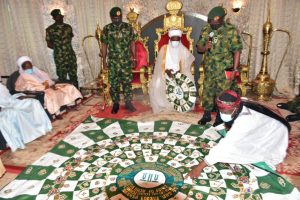 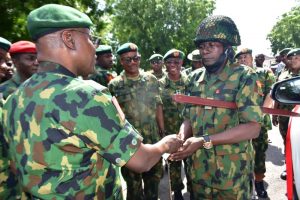 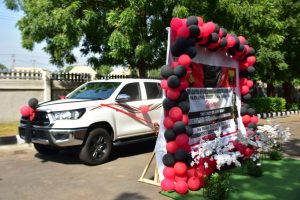 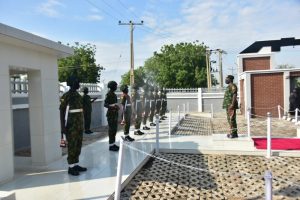 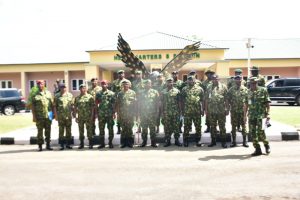 The Executive Governor of Sokoto State Right Honourable Aminu Waziri Tambuwal has reaffirmed his commitment to support the Nigerian Army (NA) to tackle insecurity bedeviling the Northwest geopolitical zone of Nigeria. Governor Tambuwal stated that in spite of the state’s lean resources, the state government will do all it could to provide requisite support to end banditry in Sokoto and the contiguous states. The Governor stated this when the Chief of Army Staff Lieutenant General Faruk Yahaya paid him a courtesy visit at the Government House on Monday 18 October 2021. The COAS was on an operational visit to Headquarters 8 Division to assess troops’ operational readiness and provide guidance on strategies to address the security challenges within the Division’s Area of Operational responsibility.

Governor Tambuwal, who noted that the visit was a home coming for the COAS as a worthy son of Sokoto state, urged him to review the ongoing operations with renewed strategies to identify and destroy bandits’ enclaves. He stressed that the recent attacks on Goronyon village was quite disheartening and therefore informed the need to review strategies of military operations in the zone to prevent a reccurrence.

He further called for collective effort among citizens and security agencies to fish out perpetrators of heinous crimes in the society. He cautioned the public not to shield any one supporting banditry, especially their informants and logistics suppliers.
He also called on the Federal Government to inject more personnel and resources to make operations much more easier for the security agencies.

In his remarks, the COAS, Lieutenant General Faruk Yahaya commended Governor Tambuwal for his continuous support to the NA and urged him not to relent on his effort. He assured, that the NA will not disappoint the government and people, as effort is ongoing to reorganise and rejig the operations in the Northwest. He emphasized that the NA is working assiduously with other security agencies and stakeholders to robustly confront the situation.

While on the visit to Headquarters 8 Division, the COAS received a brief on the security situation of Sokoto and the contiguous states from the General Officer Commanding(GOC), Major General Uwem Bassey. He commended the Officers and soldiers of the Division for their commitment and urged them to redouble their efforts in the fight against banditry. He advised the commanders to always appreciate the contributions of other stakeholders for supporting the NA in the ongoing joint operations. He assured the troops of his readiness to provide necessary equipment to conduct their operations.

On troops’ welfare, the COAS assured the personnel of constructing additional accommdation blocks for personnel, adding that uniform and military kits will also be provided.

In continuation of the fulfilment of his pledge to empower Regimental Sergeant Majors (RSMs) of the NA, the COAS presented a Toyota 4×4 Hilux vehicle to the RSM of the Division, Master Warrant Officer Simon Jimba. General Yahaya reiterated that RSMs are the bedrock of NA regimentation and as such adequate attention needed to be accorded them, so they could effectively
groom the young soldiers.

The COAS also visited the Sultan of Sokoto, His Eminence, Alhaji Dr Muhammad Sa’ad Abubakar, the III. During his remarks at the Sultan’s palace, General Yahaya stated he was in the Palace to pay his respect and to seek the Sultan’s guidance and support, as custodian of culture and traditions of the people. He pointed out, that the role of traditional leaders in the fight against insecurity is key in every society. He added that traditional leaders must therefore find ways of discouraging youths from partaking in criminality in the society.

Responding, his Eminence, Alhaji Muhammad Sa’ad Abubakar urged the COAS to mobilize every available resources at his disposal to confront the adversaries of the state. He assured the COAS of his continuous support to enable him succeed in his mandate.

The COAS later visited frontline troops deployed at Forward Operation Base Sabon Birnin and Isa, both in Sokoto state, to assess the security situation, following recent bandits’ attack on the communities. While addressing troops at the respective FOBs, the COAS commended them for restoring peace in the communities. He urged them to remain alert and vigilant to prevent any surprise attack.