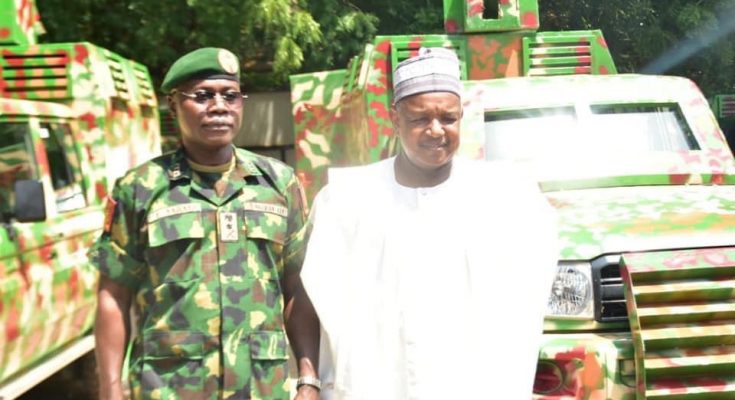 The Executive Governor of Kebbi State, Senator Abubakar Atiku Bagudu has averred that operations of the Nigerian Army (NA) in Kebbi State has increasingly enabled farmers access to their farms without threats; especially farmers in Danko Wassagu, who have now returned to their farming occupation. Senator Bagudu stated this, when the Chief of Army Staff (COAS) Lieutenant General Faruk Yahaya paid him a courtesy visit today Tuesday 19 October 2021 at the Government House in Kebbi State during an operational visit to 8 Division Area of Responsibility to assess troops’ operational engagements in the Division’s Area of Responsibility.

Governor Bagudu urged the NA to sustain her operations and bring about lasting peace in Kebbi State and Nigeria at large. He commended the NA for providing aid to civil authority at a critical period, when None State Actors are engendering criminality and insecurity in the society and are shielded by unpatriotic citizens. He urged the NA to continue to partner with other security agencies and stakeholders to rid the north west of banditry.The Governor reaffirmed the state government’s commitment in collaborating with the NA to tackle insecurity in the state.

Governor Bagudu also introduced reconfigured operational vehicles to the COAS, which he said were constructed by the state government under the supervision of the Deputy Governor, Colonel Samaila Yombe Dabai (rtd) to provide operational platforms for troops. He assured the COAS that the vehicles will soon be handed over to the troops for deployment.

In his remarks, the COAS, Lieutenant General Faruk Yahaya lauded the state government and people of Kebbi state for their support to the NA. He added that renewed measures will be taken to address the security challenges affecting the state. He called on the state government to sensitize the public on the danger of colluding with bandits to create panic within their communities. He also noted that all hands must be on deck to resolutely deal with the prevailing security situation.

In the same vein, the COAS paid a visit to His Royal Highness, the Emir of Gwandu, Alhaji Muhammadu Iliyasu Bashar. He appealed with traditional leaders to guide the conduct of members of their communities against providing tacit support to bandits, adding that if this is achieved, it will add value to the relentless effort of security operatives to restore law and order in the north west geopolitical zone.

The Emir of Gwandu Alhaji Muhammadu Iliyasu Bashar commended the COAS for embarking on an operational tour of formations and units to give direction and guidance on how to overcome the diverse security challenges confronting the country.

The COAS also took a tour of 1 Battalion, Birnin Kebbi, where he was given detailed operational brief on the security situation of Kebbi state.

In his address to troops of the Battalion, General Yahaya urged them to remain focused and professional in the conduct of every operation. He disclosed that arrangement is been made to provide the unit with necessary equipment to enable it carry out its mandate.

Previous PostOPERATION HADIN KAI: TROOPS EXTERMINATE ISWAP/BHTS IN ENCOUNTER ... 4 others get killed in IED Explosion. Next PostCOAS COMMISSIONS 20 BLOCKS OF ACCOMMODATION FOR SOLDIERS IN GIGINYA BARRACKS SOKOTO STATE…Charges soldiers to be committed in the fight against banditry