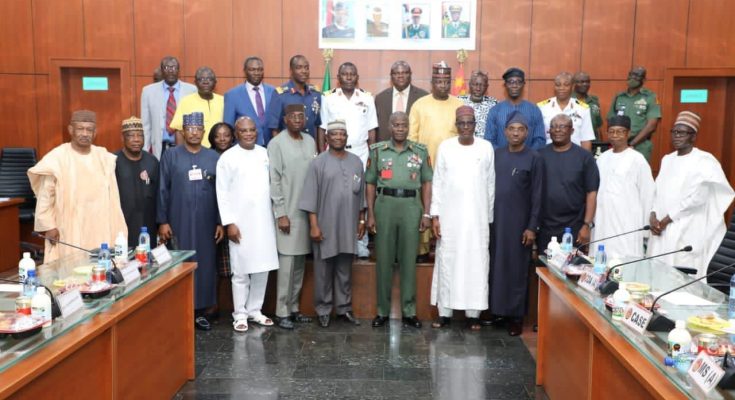 In an effort to reposition the Armed Forces of Nigeria, the Ministry of Defence(MOD) Implementation Committee on the Reform of the Armed Forces of Nigeria (AFN) today, 27 October, 2021 visited the Army Headquarters, Abuja. The Committee was led by its Vice Chairman, Lieutenant General Abel Akale (rtd), who represented the Chairman, a former Chief of Army Staff, Major General Alwali Kazir (rtd) stated that the visit was to brief the Chief of Army Staff( COAS) Lieutenant General Faruk Yahaya on the mandate of the Committee and to elicit inputs from the Nigerian Army in order to facilitate the speedy implementation of the recommendations contained in the reform report.

Gen Akale added that the Committee was constituted by the Honourable Minister of Defence, Major General Bashir Magashi (rtd) to articulate policies that will enhance both operational and administrative performance of the AFN and the Ministry of Defence.

In his response, the COAS, Lt Gen Faruk Yahaya expressed appreciation for the visit and lauded the quality of the composition of the committee, describing it, as composed of well experienced senior officers, both serving and retired, who have contributed immensely to the AFN while in service. He assured the Committee of Nigerian Army’s unflinching support towards the successful implementation of the reform.

Lt Gen F Yahaya noted that the implementation of the reform report would aid the Services in the discharge of their duties inline with international best practices.