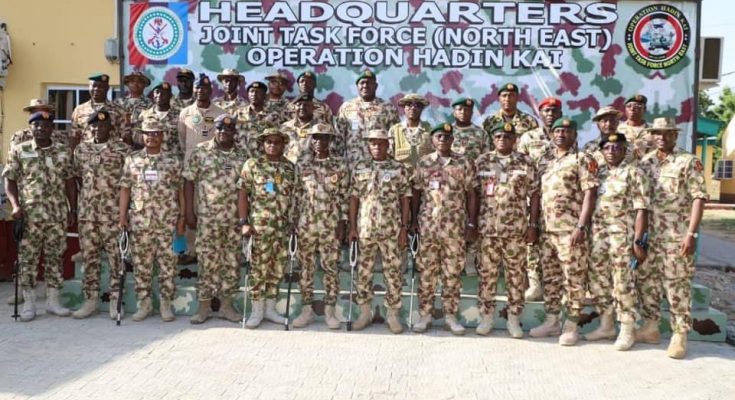 The Honourable Minister of Defence (HMoD) Major General Bashir Magashi (Rtd) has assured troops of Joint Task Force North East Operation HADIN KAI of supply of more equipment and logistics for operational enhancement, as they combat terrorism and insurgency in north east Nigeria. The Defence minister made this known during his operational and assessment visit to the Headquarters Theater Command Operation HADIN KAI , in Maiduguri on Friday 29 October 2021.

Appreciating the Commander-in-Chief of the Armed Forces, President Muhammadu Buhari for providing requisite logistics support to prosecute the war against insurgency in the North East, General Magashı stated, “we are fully committed in providing all the necessary resources to enable you do your job professionally to the best of your ability. We have all seen your commitment and we are proud of you”. He expressed optimism that success is near and that with sustained determination and commitment, insurgency will be brought to an end. He commended the overall performance of the Nigerian Military in the fight against insurgency in the North East.

Operational Briefs were presented by the Theatre Commander OPHK, Major General Christopher Musa and the Force Commander Multinational Joint Task Force (MNJTF) to the HMoD, who later had a chat with members of the press on issues relating to his visit. The Honourable Minister also commissioned a set of twin buildings, newly constructed as transit accommodation for officers of Headquarters Joint Task Force North East OPHK.

Aside the CDS and Service Chiefs, other senior officers who accompanied the minister during the visit, are Chiefs of Training and Operations from the Defence Headquarters and services, as well as the Commandant Nigerian Defence Academy.