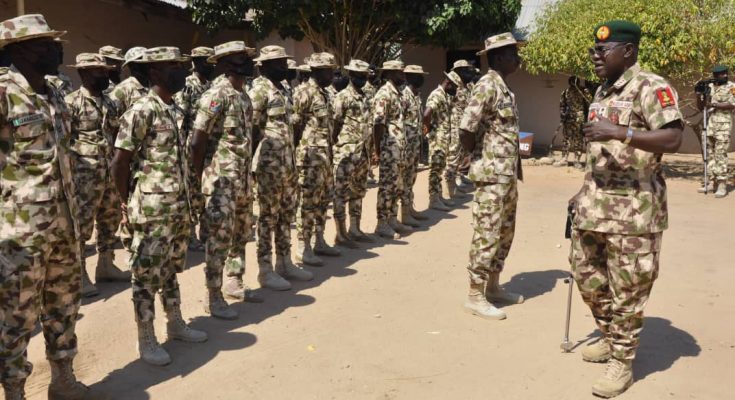 In continuation of his operational and assessment tour of formations and units of the Nigerian Army(NA), the Chief of Army Staff ( COAS), Lt Gen Faruk Yahaya today 29 Nov 21, toured the area of responsibility of 301 Regiment in Gombe State, during which he also paid a courtesy call on the State Governor, Alhaji Muhammadu Inuwa Yahaya.

Receiving the COAS at the Government House, Gombe, the Governor noted that the presence of the Nigerian Army (NA) in the state has been reassuring, as the people feel safe and secured.

Governor Yahaya pointed out that the state has continued to enjoy relative peace and tranquility as a result of the support and cooperation between the state and the NA, as well as other security agencies in the state. He assured the COAS of the state government’s support in relocating the 301 Regiment in the state to a new barracks facility to enable the Regiment effectively perform its duties. The Governor lauded the NA and other security agencies for their untiring efforts in ensuring safety and security in the nation. He urged the NA to remain resolute in achieving her constitutional mandate.

Speaking during the visit, the COAS, Lt Gen Faruk Yahaya disclosed that he was in the state on operational tour of Army formations and units across the country to obtain first hand information on the security situation of their areas of responsibility and their challenges, with a view to expeditiously address them, in order to shore up the morale and fighting will of the troops. He expressed appreciation to the Government and people of Gombe State for the tremendous support accorded the 301 Artillery Regiment in executing its assigned tasks.
Gen Yahaya called for sustenance of synergy and inter agency cooperation among government agencies and security services to enhance security in the state.

Earlier, the COAS had received a brief from the Commander 301 Regiment, Col John Mbanefo on the activities of the Regiment.

Addressing troops of the Regiment, the COAS expressed appreciation for their selfless sacrifices and urged them to remain steadfast in the conduct of their operations to maintain peace and security in their area of responsibility. He assured, that all logistics concerns of the Regiment will receive prompt and due attention.