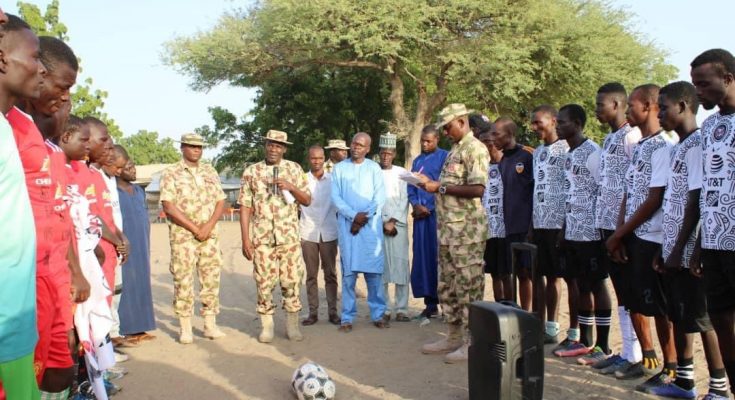 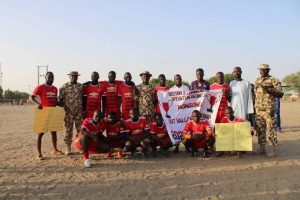 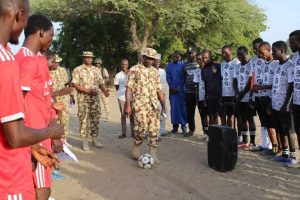 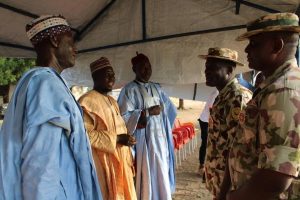 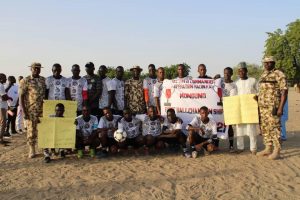 The tournament, which is part of the Sector’s Civil- Military Cooperation activities and non- kinetic approaches within its Area of Responsibility will feature Eight Football teams to participate in the Commander Sector 3 Football Championship. In order to have good outing and seamless tournament, the Commander kitted the teams with Jersey, new foot balls and other football accessories.

In his opening remarks, the Sector Commander who was represented by Commander Artillery Brigade, Brigadier General JR Lar, urged the Youths to shun violence and any acts of aiding the Boko Haram and Islamic State of West Africa Provinces terrorists in the community. He stated further that more Civil- Military Cooperation activities which will be of good benefits to the Youths and the community will be embarked on by the Sector. In order to further cement the existing good relationship within the Sector’s Area of Responsibility.

The flag off ceremony match was between the Monguno United team and Kumburi United team. Diginataries that graced the occasion were the District Head of Monguno Community Alhaji Baba Wakil Mustapha, Heads of Non Governmental Organizations, Commander Sector 3 Garrison, Colonel Emanuel E Agada amongst others.

Previous PostCOAS VISITS KONTOGORA, OPTIMISTIC OF TROOPS' RESILIENCE IN TACKLING INSECURITY Next PostOPERATION HADIN KAI: NO CAUSE FOR ALARM, TROOPS ON GROUND TO WARD-OFF THREATS IN MAIDUGURI