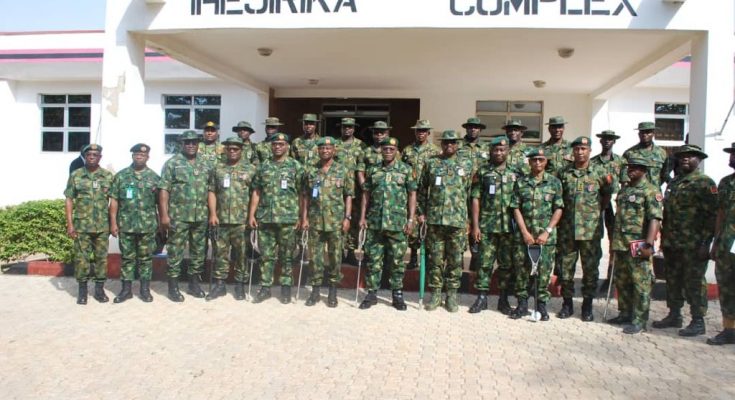 The Chief of Army Staff (COAS) Lieutenant General Faruk Yahaya has expressed optimism with the resilience and doggedness displayed by troops of the Nigerian Army Corps of Artillery (NACA) and Nigerian Army Training Centre (NATRAC) in their efforts at combating banditry and other security challenges in Kontagora and Niger State in general.

The COAS made this known while addressing troops of the two formations during his maiden operational visit to Nagwamatse Barracks, Kontagora, Niger State today 12 December, 2021. He charged the troops to remain resolute and committed in discharging their operational responsibilities, adding that his visit was informed by the need to have an on-the-spot assessment of the situation in the location.

He expressed satisfaction with the high spirit displayed by the troops, urging them to sustain the current operational tempo by consolidating on the successes recorded thus far. He assured them that he places high premium on the welfare of officers, soldiers and their families and will therefore, not backpedal in promptly addressing their needs and challenges.

The Commander Corps of Artillery, Major General Taritimiye Gagariga and the Commander, Nigerian Army Training Centre, Major General Oluyinka Soyele, in their separate briefs to the COAS, noted that socio-economic activities have been restored in Kotangora, with the relentless effort of the combined troops.