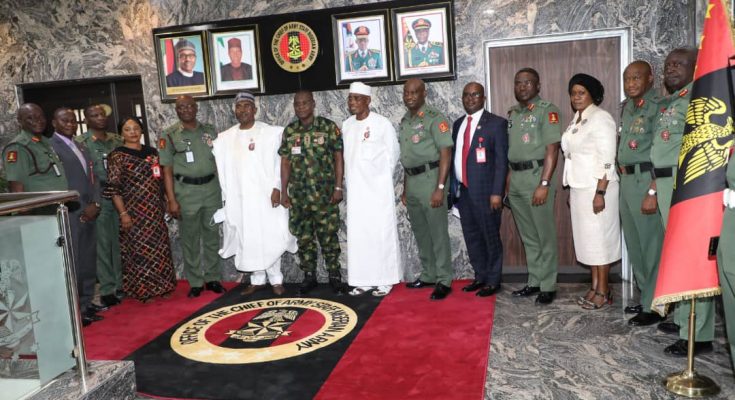 The Chairman/Chief Executive Officer National Drug Law Enforcement Agency (NDLEA), Brigadier General Mohammed Buba Marwa(rtd) has called for a robust partnership between the Nigerian Army(NA) and NDLEA in curbing the menace of substance abuse and trafficking in Nigeria. General Marwa made the call when he led officers of the agency on a courtesy visit to the Chief of Army Staff (COAS), Lieutenant General Faruk Yahaya at Army Headquarters today Thursday, 16 December 2021.

The Chairman pointed out that the abuse and illicit trafficking of drugs in the country have assumed a worrisome dimension, disclosing that several youths are now into substance abuse. He further maintained that there is a nexus between drug abuse and the current state of insecurity in Nigeria. He restated that as the lead agency in the fight against drug abuse and trafficking in Nigeria, NDLEA will remain steadfast in its operations in order to ensure a drug free society.

Brigadier General Marwa attributed most of the terrorists and banditry activities witnessed in the country to substance abuse. He reassured that the NDLEA is committed to a robust collaboration with the NA in its operations to drastically reduce the menace of drug abuse and other criminalities. He also lamented that drug abuse has ruined many homes in the society.

He used the medium to appreciate the NA for the training support provided to the NDLEA Academy.He also commended the NA for the sacrifices, patriotism and gallantry in tackling security challenges in the country.

Responding, the COAS assured that the NA under his watch, will continue to support the NDLEA in discharging its constitutional mandate. He further noted that drug trafficking is a grievous crime, and advocated for decisive action against drug traffickers and other related crimes in the country. He urged the agency to engage the youths constructively, through sensitization and awareness campaigns that would proactively stem the menace of drug abuse in the society.