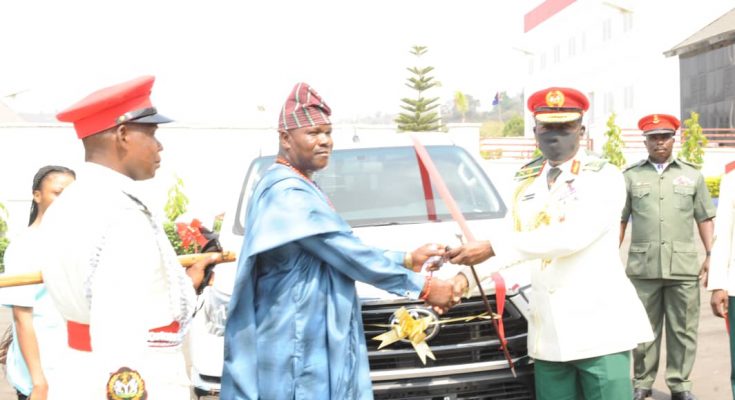 Jan 16, 2022Press ReleaseComments Off on COAS CELEBRATES HEROES, PRESENTS VEHICLES FOR THEIR SACRIFICES

In commemoration of the Armed Forces Remembrance Day Celebration(AFRDC) 2022, the Chief of Army Staff (COAS), Lieutenant General Faruk Yahaya has presented brand new Hilux Vehicles to 14 living heroes of the Nigerian Army for having served the nation, when their services were mostly needed. The COAS added that the presentation was in honour and recognition of the sacrifices of both the fallen heroes and veterans who are still alive for their services to the Nigerian Army (NA), the nation and humanity.The presentation was done nationwide, across all formations of the NA to signpost the significance of the celebration.

Presenting the vehicles on behalf of the COAS to one of the beneficiaries, the Provost Marshal (PM), Army, Major General Robert Aiyenigba stated that Armed Forces Remembrance Day Celebration provided an opportunity for retrospection and appreciation of the patriotism and sacrifices demonstrated by both veterans and fallen heroes. ” It is in appreciation of their services that the COAS presents these vehicles to the retirees” he stated.Gen Aiyenigba further pointed out, that the gesture is an affirmation of the high premium, the COAS places on welfare of personnel.

The Provost Marshal symbolically handed over the keys and official documents of a brand new Hilux Vehicle to the former Regimental Sergeant Major, Headquarters Nigerian Army Corps of Military Police (NACMP), Ex Army Warrant Officer Akinyokun Felix, on the occasion of his retirement after 35 years of meritorious service to the nation.

In his response for the kind gesture, Ex MWO Akinyokun Felix thanked the COAS for finding them worthy of the award, describing it as a morale booster to them and those they left in service. He added that they will continue to support the NA to succeed in her constitutional mandate, even in retirement.