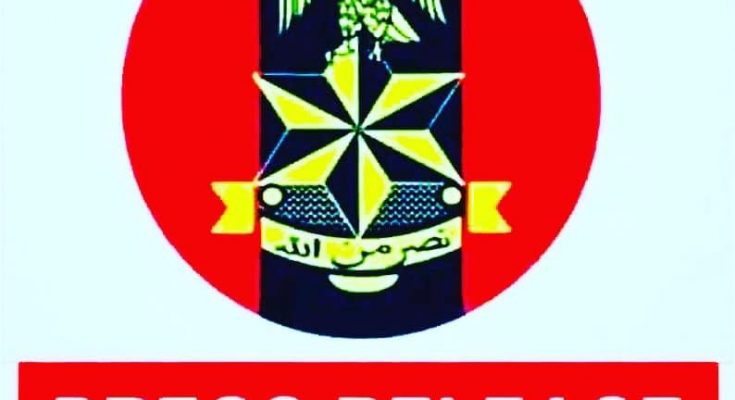 Mar 31, 2022Press ReleaseComments Off on

The Nigerian Army (NA) has been notified of a publication by Vanguard Newspapers, 30 March 2022, where it was alleged that NA troops deployed in Ovre – Eku community; a border town between Edo and Delta states shot and killed one Master Cyril Obruche. The unfurtunate incident allegedly occured during a protest at PRESCO plc in the border community.

For the records, considering the sanctity of human life and the enormity of the allegation, the NA formations under whose areas of responsibility the community fall conducted a discreet investigation that revealed that troops were not deployed to the said company, viz.,PRESCO plc. The media report is not only misleading, but laced with falsehood orchestrated to present the NA in bad light.

It is important to unequivocally state that no soldier was deployed at Ovre – Eku community, thus the unfortunate incident that led to the death of Master Cyril Obruche during the protest cannot be attributed to troops of the NA. It is also pertinent to reiterate that, the corpse of the deceased is not in the custody of the NA.

While, the NA sincerely sympathizes with the family of the deceased and members of Ovre – Eku community, individuals or groups peddling this falsehood are please urged to get their records straight and desist from misinforming the public, thereby tarnishing the image and reputation of the NA.

The NA remains resolute in its resolve to respect the fundamental rights of the citizenry and adhere to extant rules of engagement in internal security operations.