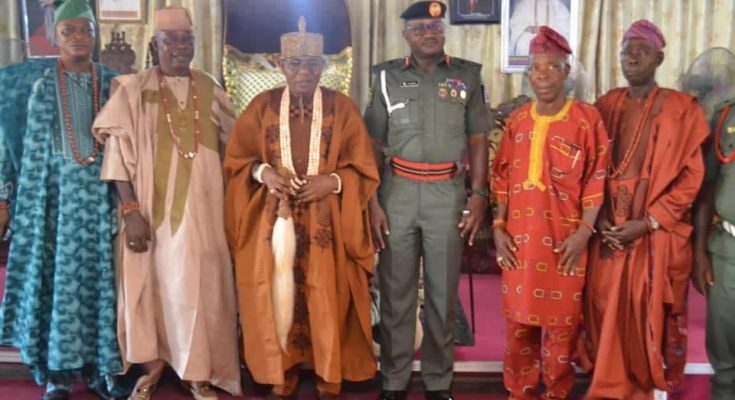 May 01, 2022Press ReleaseComments Off on DEJI OF AKURE APPLAUDS NIGERIAN ARMY FOR SUSTAINING PEACE IN SOUTH WEST

The Deji of Akure Kingdom, His Imperial Majesty, Oba (Dr) Aladetoyinbo Ogunlade Aladelusi, has applauded the Nigerian Army (NA) for the sustenance of peace in the South West region, particularly in Ondo State.

Oba Aladelusi expressed his heartfelt appreciation to the NA when the Commander, 32 Artillery Brigade, Brigadier General Mukhtar Adamu paid him homage at his palace in Akure. The Monarch pledged to continue to support the NA in achieving its operational mandate in the state. He also reassured the Comd that his kingdom will continue to work harmoniously with the NA for the peace and security in Ondo State.

In his remarks, Brigadier General Mukhtar Adamu stated that on assumption of duty as the Brigade Commander, he deemed it fit to pay homage to the Royal Father for his blessings and support in his Area of Responsibility(AOR).

Brigadier General Adamu added that the NA will continue to synergize with critical stakeholders in the State, most especially the cooperation of traditional institutions. He averred that the royal fathers are valuable for meaningful and sustainable operational success in his AOR.