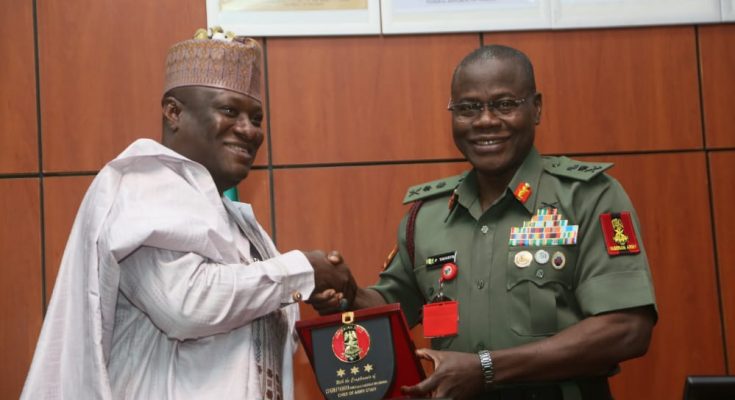 May 01, 2022Press ReleaseComments Off on NEW MOD PERMSEC CALLS FOR WHOLE-OF -SOCIETY APPROACH IN COMBATING INSECURITY …harps on synergy between Ministry of Defence and Nigerian Army

approach in the fight against insecurity in Nigeria.
The PermSec made this call today, 27 April, 2022 when he paid a familiarization visit to the Army Headquarters in Abuja.

Speaking during the visit, Dr Kana averred that surmounting the security challenges confronting the country requires whole-of-society and multi-disciplinary approach. He enjoined all stakeholders to mobilise in support of the military and security agencies who are at the forefront of ensuring Nigeria’s national security. He assured that the MOD is determined to support the NA in the fight against insurgency and other contemporary security challenges, adding that the Armed Forces of Nigeria remains a vital arm of the MOD and a leading institution in the national security architecture of the nation.

The seasoned technocrat pledged to sustain ongoing reforms in the AFN and foster seamless collaboration between the NA and the ministry in order to fast track the restoration of peace and tranquility in troubled areas of the country.

Dr Kana commended the effort and resilience of the Nigerian Army (NA) in the ongoing fight against insurgency and other security challenges in the country. He disclosed the ministry’s desire to ensure provision of quality education for children and wards of military personnel by repositioning Command Primary and Secondary Schools across NA formations and Units.This he said will further boost the morale and fighting will of the troops.

In his remarks, the COAS, Lieutenant General Faruk Yahaya congratulated Dr Kana on his appointment as the Perm Sec, Ministry of Defence. He noted that both the NA and the ministry enjoy a functional working relationship and sued for its sustenance. Gen Yahaya expressed appreciation for the Perm Sec’s willingness to support the NA in the execution of its constitutional mandate.

Present at the event were Directors from the Ministry of Defence and Principal Staff Officers of the Army Headquarters.