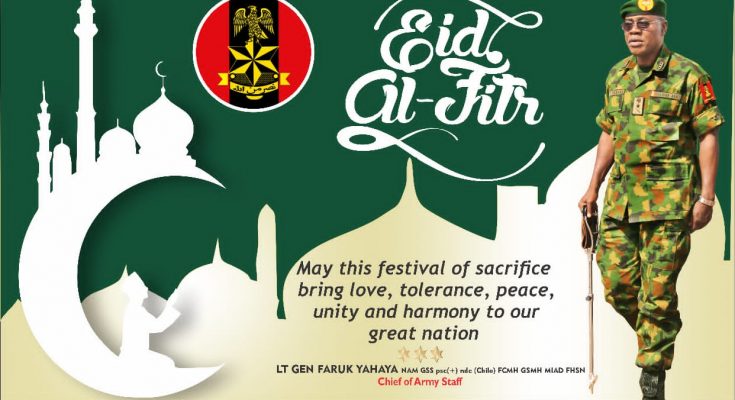 COAS FELICITATES WITH TROOPS ON EID-EL-FITR, CHARGES THEM TO REMAIN LOYAL APOLITICAL

May 02, 2022Press ReleaseComments Off on COAS FELICITATES WITH TROOPS ON EID-EL-FITR, CHARGES THEM TO REMAIN LOYAL APOLITICAL

The Chief of Army Staff (COAS), Lieutenant General Faruk Yahaya has felicitated with troops of the Nigerian Army (NA) on the occasion of the Eid-El-Fitr Celebration. Presenting his Goodwill message to personnel across all NA formations and units, the COAS specially recognized and appreciated their sacrifices and commitment in various ongoing operations nationwide.

The COAS urged officers and soldiers to leverage on the holy season of Ramadan to reflect on the significance of loyalty, obedience and sacrifice, stressing that the season provides a unique opportunity to re-examine and re-adjust efforts towards fulfilling their constitutional roles, in order to justify the confidence reposed in them by Nigerians. He charged field commanders to redouble their efforts in ongoing operations, adding that the best Sallah gift he expects from them is to eliminate as many bandits, kidnappers and terrorists as possible, and recover as much weapons and ammunition from criminal elements.

Gen Yahaya used the medium to pay special tributes to officers and soldiers who paid the supreme price in the defence of fatherland. He emphasized that under his watch training and welfare of personnel and their families will continue to receive paramount attention. The COAS noted that this informed his resolve to improve on medical facilities and services, while ensuring that treatment of personnel and their families, particularly those who are wounded in action will continue to get support and special vocational training to help them cope with their new health status and overcome associated psychological trauma.

He however, admonished officers and soldiers to remain apolitical and professional in the discharge of their constitutional responsibilities, as the electioneering period approaches. He urged them to defend the nation’s democracy and avoid being lured into politics.

While wishing all Nigerians a happy Eid-el-Fitr, Gen Yahaya expressed gratitude to the President, Commander-in- Chief of the Armed Forces of Nigeria, Muhammadu Buhari and all Nigerians for their unflinching support to the Nigerian Army in the execution of its constitutional mandate.