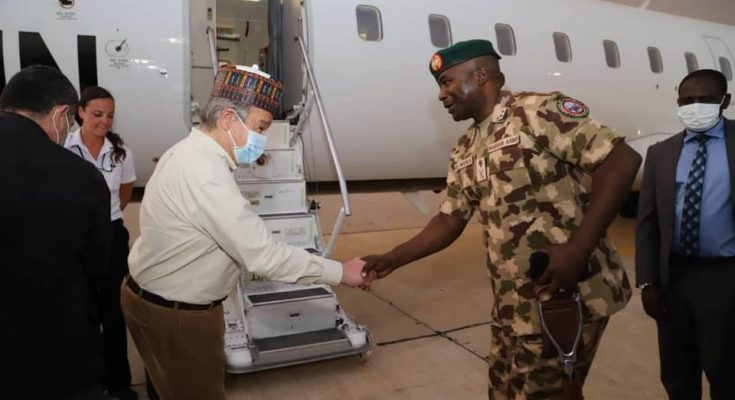 The United Nations Secretary General Antonio Guteres was in Borno State on Tuesday 3 May 2022 to assess the North East region which has been plagued with the activities of terror groups for over a decade. The visit was necessitated due to the fact that the counter terrorism war against the terrorists has in the last one year assumed a different dimension following the mass surrendering of the insurgents and members of their family to the troops.

This unprecedented act which came as a result of the tireless and determining effort of troops of Operation HADIN KAI attracted global attention and necessitated the visit of the UN Secretary-General who led a delegation from the world body to assess the humanitarian situation.

During the tour, the UN Chief was led to some Internally Displaced Persons (IDPs) Camps in the state and also one of the holding facility for the repentant insurgents and thereafter paid a courtesy visit to Borno State Government House in Maiduguri.

In his remarks at the Government house, the UN Chief commended Operation HADIN KAI for their roles in the mass surrendering of the insurgents which viewed as a sign to ending the crisis. Mr Antonio Guterres also lauded the effort of the Armed Forces of Nigeria for rescuing some kidnapped victims from the terror groups enclaves.