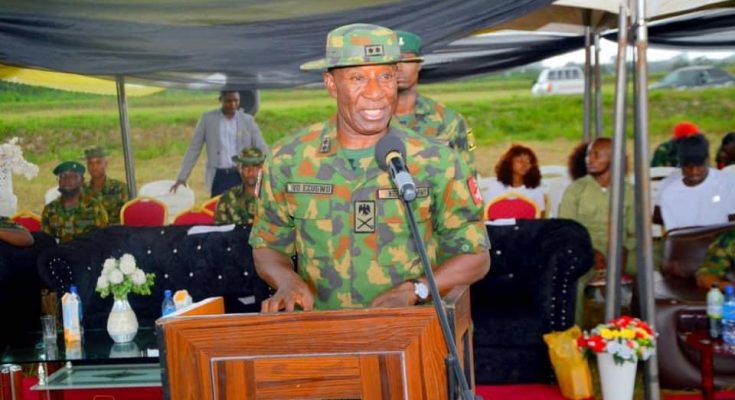 The Commander Infantry Corps challenged the troops to effectively apply the knowledge gained during the competition in their future endeavours. This according to him will assist them in curtailing the menace of boko haram terrorist, banditry, kidnapping, herdsmen/ farmers clashes, among others vices bedevilling the country.

General Ezeugwu enjoined the troops to continue to participate in all training activities in order to achieve the overall goals of the Chief of Army Staff vision of a professional and better Nigerian Army. He implored the troops to improve on the existing civil – military relations by exercising utmost restraints even in the face of serious provocation and eschew any act that will bring the name of the Nigerian Army into disrepute especially when dealing with other security agencies.

He commended the troops for their tenacity, zeal, perseverance and endurance throughout the competition and congratulated the overall best formation as well as appreciated other formations for their competitive spirits and urged them to be more dedicated in subsequent competitions.

In his remarks, the General Officer Commanding 2 Division Nigerian Army, Major General Gold Chibuisi noted that the aim of the competition have been achieved, as the event has confirmed the readiness, capabilities and commitment of the troops to military training and preparedness in the face of contemporary security challenges. He urged those selected to represent the Division to put in their best during camping in order to adequately prepare and emerge victorious in the forth coming Nigerian Army Inter Division competition.

At the end of the competition, 2 Division Garrison emerged overall best formation with 976.5 points, 32 Brigade came second with 953.25 points and 4 Brigade third with 832.75 points. 42 Engineer Brigade came fourth with 708 points and 22 Brigade fifth with 680.5 points.

The highlights of the event was the presentation of prizes, trophies and a novelty falling plates shooting competition between the Special Guest of Honour team and the 2 Division Garrison Commander’s team.

Previous PostCOAS URGES TROOPS TO COMPLIMENT KINETIC EFFORTS WITH SPIRITUAL INTERVENTION Next PostPHANTHOM REPORT ON PURPORTED DISQUIET IN THE NA OVER POOR EQUIPMENT, WELFARE, A FAILED ATTEMPT AT INSTITUTIONAL BLACKMAIL