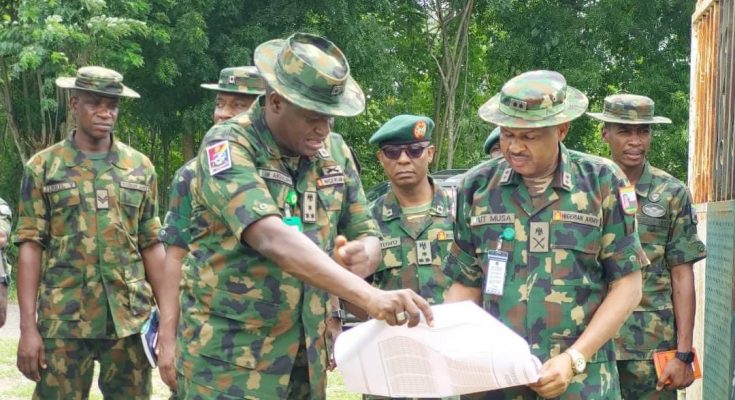 The GOC gave the charge during his maiden familiarisation visit to units and formations in Ogun State. The GOC was received and briefed by the Commander 35 Artillery Brigade Brigadier General Isa Abdullahi on the Brigade’s operational activities, who later led the GOC and members of his entourage on a guided tour in the barracks

He further assured the troops that the Chief of Army Staff (COAS) would continue to improve on efforts that will make the troops function optimally, stressing that the army authority was very much aware of the accommodation challenges being faced by the troops and that very soon they would smile as some of the renovations in the barracks are near completion

The GOC, however, warned the troops to stay out of illegal duties or anything that would negate the vision of the COAS which is to have a professional Nigerian Army ready to accomplish assigned missions within a joint environment in defense of Nigeria.

In a similar vein, the GOC paid a courtesy call on the Governor of Ogun State Prince Dapo Abiodun where he assured the Governor that his troops will continue to conduct themselves professionally to restore law and order in the state whenever the need arises. Major General Musa commended the cordial Governor for the support he has been rendering to NA troops in the State and that his office is open for any assistance from the army.

Major General Musa also paid homage to the Alake and Paramount Ruler of Egbaland, His Royal Majesty Oba Adedotun Aremu Gbadebo Okukenu IV whom he thanked for his fatherly efforts in ensuring a harmonious relationship between the military and his subjects. He also sought the fatherly blessing of the royal father

Nigerian Army 81 Division has an area of responsibility covering Lagos and Ogun States of Nigeria, which are the country’s economic nerve centre.