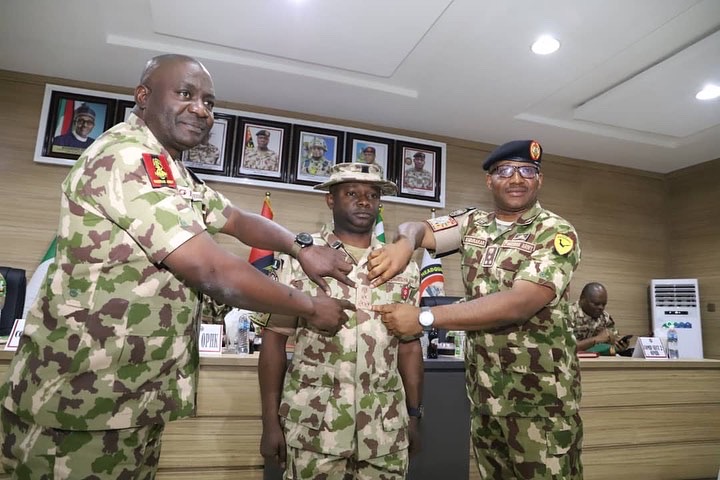 In his remarks, the Theatre Commander Major General Christopher Gwabin Musa congratulated the newly promoted Brigadier Generals for their elevations and thereafter commended their spouses and family members their support and prayers toward their progress in the NA.

The Theatre Commander, urged the Senior Officers to be focused, firm, fair and flexible to personnel under their command while exercising their powers of command . He encouraged them to commend those doing well and must correct and punish those not willing to do the right thing.

Furthermore, General Musa encouraged those who were not promoted not to despair as the future remains very bright. Thereafter, General Musa urged them to always remember that the country has invested so much in training them and they must therefore reciprocate the kind gesture by being loyal and committed to the tasks ahead.

During the vote of thanks, Brigadier General AJ Ahmad on behalf of the newly promoted Brigadier Generals expressed their profound gratitude to the Commander in Chief of the Armed Forces, Federal Republic of Nigeria, President Muhammadu Buhari, the Minister of Defence, the Chief of Defence Staff ( CDS ) , the Chief of Army Staff ( COAS) and the Army Council for approving their promotion. He further thanked the Theatre Commander for his leadership and pledged to on behalf of his colleagues to continue to give their best in their service to their father land.

Previous PostAFRD 2023: BE CONTENTED AND CONTRIBUTE POSITIVELY TO THE GROWTH OF THE NATION ...General CG Musa charges officers and troops of OPHK Next PostTROOPS RAID IPOB/ESN CAMPS IN EBONYI AND ENUGU STATES, RECOVER IED, FIRE ARMS