Home Press Release AFRD 2023: BE CONTENTED AND CONTRIBUTE POSITIVELY TO THE GROWTH OF THE NATION …General CG Musa charges officers and troops of OPHK 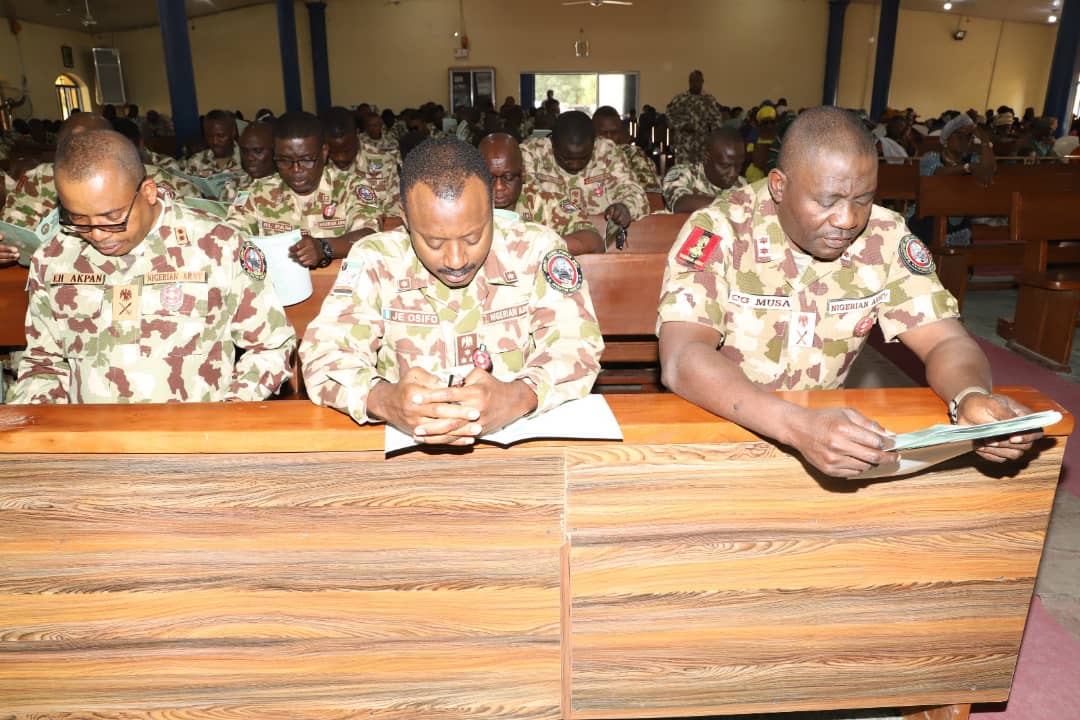 AFRD 2023: BE CONTENTED AND CONTRIBUTE POSITIVELY TO THE GROWTH OF THE NATION …General CG Musa charges officers and troops of OPHK

Jan 08, 2023Press ReleaseComments Off on AFRD 2023: BE CONTENTED AND CONTRIBUTE POSITIVELY TO THE GROWTH OF THE NATION …General CG Musa charges officers and troops of OPHK

The Theatre Commander (TC) Joint Task Force North East Operation HADIN KAI (OPHK) Major General Christopher Musa has called on all officers and troops in the Theatre of OPHK to be contented with their income, remain resilient and contribute positively in the fight against insurgency in the North East region and the effort to restore peace and tranquility in the nation at large.

General CG Musa made this call on Sunday, 8 January, 2023 during the Joint Interdenominational Church Service held at Our Lady Queen of Nigeria Catholic Church Maimalari Cantonment to commemorate 2023 Armed Forces Remembrance Day Celebration and the selfless service and sacrifices of falling and serving heroes.

In his words “We want to pray for the repose of the souls of our gallant fallen heroes that have paid the supreme price as well as to appreciate those still serving for their selfless sacrifice towards the peace and stability of Nigeria as a nation. He added that the Service Chiefs are happy with the successes achieved while urging everyone to do more. He therefore charged all officers and troops to remain steadfast, disciplined, committed and above all be contented with their income while taking good care of their families.

The high points of the service were reading from the scripture, special prayer session for the fallen heroes, those injured, and all those still serving the nation. It was also followed by general thanksgiving for God’s divine protection and successes in all operations, exhortation by the vicar, group photograph and press interview.

Dignitaries that graced the occassion include Component Commanders, Formations and Unit Commanders, Principal Staff Officers from both Headquarters Theatre Command and 7 Division, Chairman Nigerian Legion Borno State, other senior officers, troops and families as well as distinguished members of the Press.