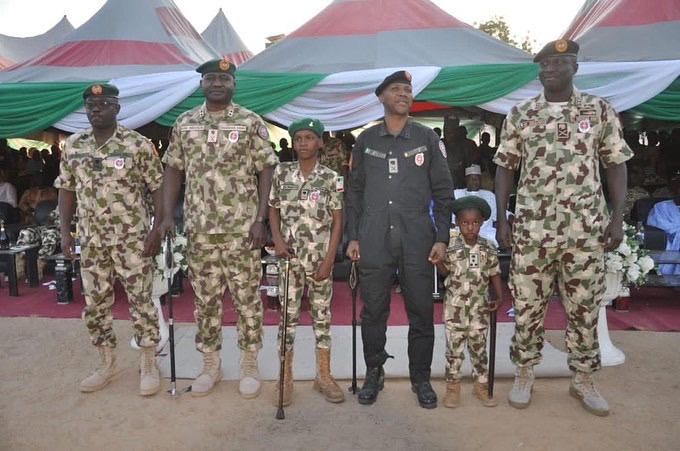 The Executive Governor of Borno State, His Excellency Professor Babagana Umara Zulum CON FNSE mni has expressed determination to continue to support the military in tackling the Boko Haram insurgents who believes in violent laws that are alien to Islam and humanity. The Governor who was represented by the Acting Head of Service, Barrister Mallam Fannami stated this in Maimalari Cantonment on Saturday, 14 January, 2023 on the ocassion of the combined Headquarters Joint Task Force North East Operation HADIN KAI and 7 Division Nigerian Army Social Activities (NASA).

He said that the efforts of troops in OPHK has provided the enabling environment and support upon which the state government activities are thriving. While thanking the President Commander-in-Chief (C-in-C) of the Armed Forces Federal Republic of Nigeria, President Muhammadu Buhari GCFR for his support and commitments towards the fight against insurgency. He also expressed appreciation to the Chief of Army Staff (COAS) Lieutenant General Faruk Yahaya for his doggedness and resoluteness in tackling the myriads of security challenges confronting the nation and therefore urged all troops not to relent in their efforts until Borno State and the entire nation is secured.

Earlier in his opening remarks, the Theatre Commander (TC) Major General Christopher Musa said the NASA is an age long tradition inherited by the Nigerian Army from the precolonial era in the second world war during which indigenous NA personnel celebrate their cultural heritage at the end of every year in a conducive atmosphere to foster esprit-de-corps. He added that the event brings officers, soldiers, families and members of host communities together to celebrate and socialise especially, here in the North East where unprecedented successes has been recorded in the recent past.

In recognising the entire efforts in OPHK, the TC reiterated that all successes recorded within the period were made possible through the resilient and commitment of all officers, troops as well as the massive support from the federal and state government in providing all the necessary resources to combat the insurgents. He therefore, expressed his unresolved appreciation to the C-in-C for the opportunity to serve as the TC, the service chiefs for their outstanding support in the Theatre and also the confidence reposed in him to fly the flag this far.

During his closing remarks, the General Officer Commanding 7 Division and Commander Sector 1 OPHK, Major General Waidi Shaibu who refered to a maxim which states “A people without the knowledge of their past, origin and culture is like a tree without a root” stating that the Army way of life and nature of our job see soldiers being away from home for extended period of time at a long stretch. So the NASA offers the opportunity to reconnect with their traditions and culture. Thus, the combined HQ JTF (NE) OPHK and 7 Division NASA is a viable forum for officers, soldiers, families and friends to unwind and also show gratitude to the Almighty for seeing us through the past year despite the series of challenges we might have faced and also to prepare ourselves for the tasks ahead in this new year 2023.

The climax of the occasion were the cultural display by various traditional group, tug of war between the soldiers wives of 212 battalion and 333 Artillery Regiment, Comical entertainment, musical performance, presentation of souvenirs, buffets, and the lighting up of the burn fire shortly after the beating of the retreat to signify the end of the occasion.