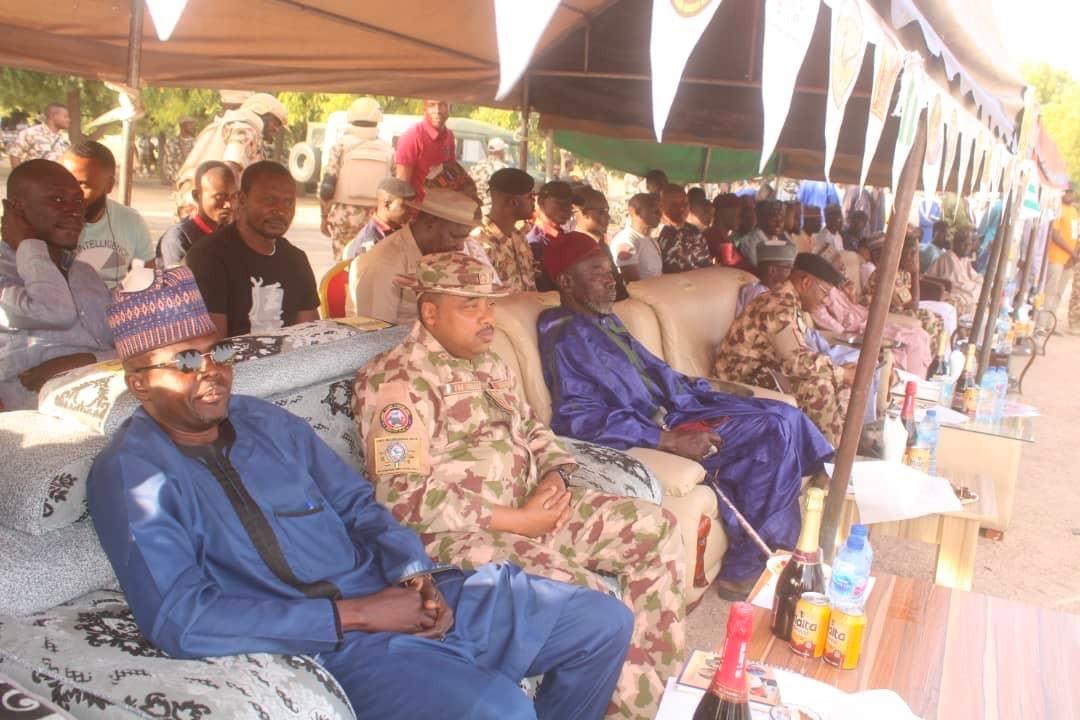 The Executive Governor of Borno State, His Excellency Professor Babagana Umar Zulum has extolled the kinetic and non kinetic efforts of the Nigerian Military in Operation HADIN KAI (OPHK) and Multinational Joint Task Force (MNJTF) which has created an enabling environment and support upon which developmental, commercial and social activities has thrived in the local governments and the Borno State at large.

Governor Zulum who was represented by the Vice Chairman Monguno Local Government Honourable Sanda Amodu gave the commendation on Monday, 23 January, 2023 during the Nigerian Army Social Activities 2022 organised by Sector 3 OPHK/MNJTF. In his words ” I am pleased to say that the combined efforts of the troops of Sector 3 OPHK/MNJTF as well as other security agencies, members of the Hybrid Forces has greatly decimated the Boko Haram Terrorists and their Islamic State of West Africa Province (ISWAP) counterpart and urshered in peace and tranquility in the entire Monguno locality and Northern Borno in general”.

He said, the government and the good people of Borno State will at all time continue to collaborate and support the Sector and the military generally in her efforts to end the menace of the marauding terrorists.

In his welcome remarks, the Commander Sector 3 OPHK/MNJTF, Major General Abdulsalam Abubakar highlighted the significance of the Nigerian Army Social Activities (NASA) which he said is an age long tradition from the pre-colonial era. In his words “I am particularly honoured and privileged to host you all here to celebrate the NASA 2022 to usher in yet another promising Year 2023 adding that “there is the cause to celebrate together bearing in mind the huge successes achieved in 2022 despite the series of challenges during the period”.

Furthermore, General AE Abubakar disclosed that the occasion brings officers, troops as well as members of the host community under one umbrella to wine, dine and savour the traditional cuisines while relishing the rich cultural heritage of the people in dance, arts entertainment, tug of war as well as other side attractions.

In the spirit of appreciation, the Commander expressed gratitude to the Federal and State Government for their unflinching support, the Chief of Army Staff (COAS) Lieutenant General F Yahaya for providing all the necessary platforms which greatly boosted troops fighting efficiency and the Theatre Commander as well as the Force Commander for their sterling leadership qualities in spearheading the fight in the North East.

In his vote of thanks, the Chairman Organising Committee, Brigadier General EE Agada expressed profound gratitude to God for making the occasion a success. He also expressed immense appreciation to the President of the Federal Republic for his strategic guidance to the military, the Governor of Borno for his support and to the Chief of Army Staff (COAS) Lieutenant General F Yahaya for his leadership, guidance and unwavering support to JTF OPHK as well the Commander Sector 3 OPHK for giving him the opportunity to serve as the Chairman Organising Community.

Highpoints of the occasion includes cultural dances and display, comical entertainment, thug of war, presentation of souvenirs to invited dignitaries and other special side attractions.