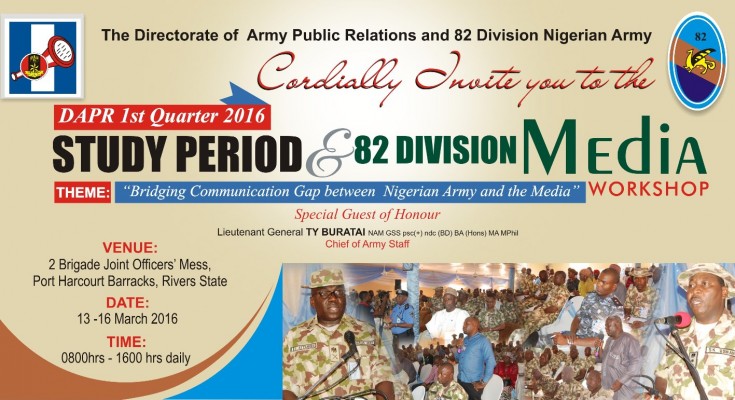 The Directorate of Army Public Relations (DAPR) in conjunction with Headquarters 82 Division Nigerian Army is organising a Study Period/Media Workshop for its personnel and journalists that cover Defence and the security beats at Headquarters 2 Brigade Port Harcourt  from 13 – 16 Mar 2016. The theme of the study period is “Bridging Communication Gap between the Nigerian Army and the Media”.

The event would feature lectures, discussions and syndicate presentations aimed at broadening the knowledge of the participants who are drawn mainly from DAPR and journalists in 82 Division Area of Responsibility. The Chief of Army Staff Lt Gen  will declare the event open on 14 March 2016. The Executive Governor of Rivers State, Chief Barrister Nyesom Wike is also expected as the Guest of Honour during the opening ceremony of the event.