Home NAOWA Your husbands have made us proud -Taraba State Governor

Apr 03, 2016NAOWAComments Off on Your husbands have made us proud -Taraba State Governor

The Executive Governor of Taraba State, Architect Darius Dickson Ishaku has commended the Nigerian Army for recent victory over insurgency in the North East. He made this known at Government House Jalingo when he played host to the Nigerian Army Officer Wives Association (NAOWA) led by its National president Mrs Umma-kalsum Tukur Yusufu Buratai, saying “your husbands have made us proud”.

He expressed appreciation to NAOWA for choosing the state for its charity programme to the less-privileged adding that the sick on hospital admission will definitely smile. He explained that his Government is taking the issue of maternal healthcare very seriously and promised that a Special Hospital for women and infants in the state will soon be commissioned.

Highlighting his transformation agenda, the Governor promised to embark on rice, tea, sugar and beef production that will create more than 50,000 job opportunities in the state. He pledged support for the NAOWA saying that his office is always open any time to assist NAOWA initiatives.

Earlier, the NAOWA National President Mrs Umma-kalsum Tukur Buratai explained that one of the cardinal principles of NAOWA is to reach out to the less-privileged, widows and children, especially widows of the deceased soldiers who lost their lives in the North East.

NAOWA National President Mrs Buratai presenting the items to one of the beneficiaries.

She revealed that NAOWA is planning to build vocational centres across the length and breadth of the nation where widows can learn skills that will help them earn good living.

Mrs Buratai informed the Governor that NAOWA was in the state for charity visit to Federal Medical Centre, Jalingo, saying that visit of this magnitude will not be completed without paying homage to the State governor. 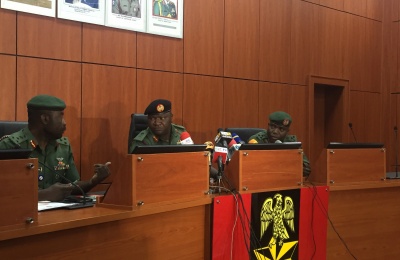 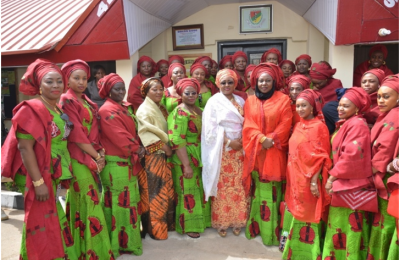