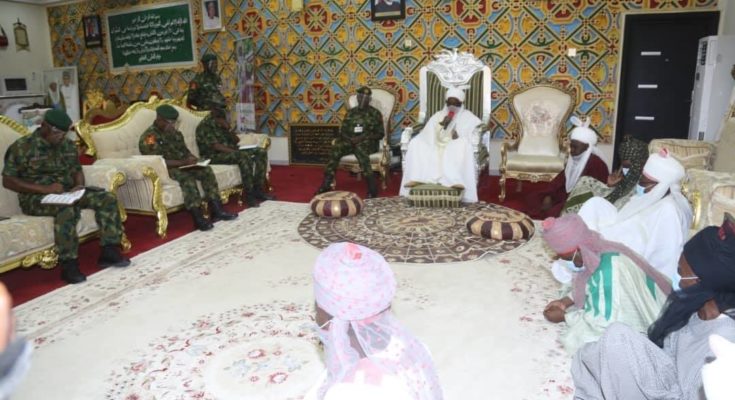 As part of efforts to combat banditry and ensure lasting peace and security in Katsina State and the North West, the Chief of Army Staff (COAS) Lt Gen TY Buratai was at the Forward Operating Base (FOB) Daura in Katsina State on 28 June 2020,where he was briefed on the operational readiness of 171 Battalion Daura to curb armed banditry and other security challenges in their area of responsibility.

The COAS used the opportunity of his operations’ tour to pay a courtesy call on the Emir of Daura Alh Dr Umar Farouk Umar CON at his palace in the ancient city of Daura. Gen Buratai informed the emir that he is in Daura on a tour to 171 Battalion and decided to pay him a courtesy visit.

He assured the emirate council and the people of Nigeria, the renewed vigour and determination of the Nigerian Army (NA) to tackle the security challenges in the Northwest and the country in general. He said his visit was in response to the concerns occasioned by the recent banditry activities in different parts of the region and Katsina State in particular.

Gen Buratai further stated that “Already, the NA has commenced reorganization of its operations across Nigeria and that senior officers of the service were in the state to fully implement the clear directives of President Muhammadu Buhari to effectively checkmate the security challenges in the country”.

The COAS used the opportunity to solicit from the emir, the good people of Daura and all Nigerians their continuous prayers, guidance and goodwill. He assured the emir that the NA and other security agencies are capable of handling the current security challenges and that the menace would be curtailed very soon.

In his remarks, the emir commended the NA and its leadership for the commitment and untiring efforts to containing the myriad of security challenges in Nigeria and in Daura emirate of Katsina State since he took over as COAS.

The emir, who stated that he is very happy and appreciative of what the NA is doing for the people of Daura and the country at large used the opportunity to alert all Nigerians on the dangers of the current dynamic and multifaceted security threats facing the nation. According to the emir “What Nigeria is experiencing now is greater than  what happened during the civil war, which was won through prayers, advices and goodwill of all Nigerians – especially the elders, traditional and religious leaders in the country without any sentiment”. He stated that the same approach is needed or expected for the ongoing insecurity in Nigeria.

The emir cautioned that at this period, there is no need for undue inteference on security matters to avoid distracting the security agencies. He added that the President is a war tested general and a two time head of state who knows the military more than any civilian. He enjoined civilians to be careful with their attempts to create a division between the government and the security agencies. He reminded the nation to remember that President Buhari took over at a critical period when Nigeria was at the verge of collapse.

He therefore urged the COAS to remain resolute, focused and continue with his good work and not to listen to distractive comments from any quarters.

Dr Farouk further used the occasion to on behalf of his council and the entire people of Daura thank the Nigerian Army for setting up an FOB and a Bn in Daura town, to enhance response to security threats in the area and surrounding communities which have so far commendably assisted in providing the required peace and security in the areas.

Dr Farouk further emphasized on the need for the people to consistently support the military and other agencies by providing useful information on movement of suspicious persons and activities in the communities for them to succeed in providing the necessary security for the people and the nation.