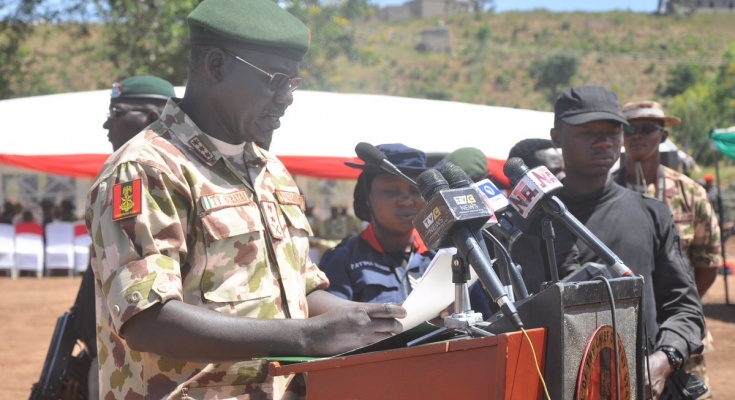 It is with great joy, privilege and honour that I stand before you today at the Presidential Ground breaking ceremony of the Nigerian Army University, Biu. Whenever a national army, such as the Nigerian Army leaves its professional domain of legal exhibition of violence and starts thinking, acting, researching and venturing into academic and intellectual affairs, it tends to arouse societal attention principally because an army of a nation is basically, professionally established to fight adversaries, defend the nation, secure and contribute to the development of the nation and its citizens.

National Armies of the 21st century are ICT- compliant, technology-based and science-prone establishments. The Nigerian Army need not be left out in this regard. The test of credibility of the Nigerian Army when supported by the university will therefore not only rely on its capability and capacity to execute legal violence in defending and securing the Nigerian nation, but also, its ability to contribute to her equipment replenishments which would add to national economic development.

This envisioned university would develop the Nigerian Army capacity to compete professionally and responsively with other armies of the world. These noble objectives are the precipitating ingredients which crystallized the founding of the Nigerian Army University Biu. It is my hope that with the support of relevant stakeholders in the founding of the University, the principal which is the President and Commander-in-Chief of the Armed Forces, the noble objectives of the university will be achieved.

The Nigerian Army is highly grateful to the President, Commander-in-Chief, the Federal Executive Council, the Minister of Defence, the Federal Ministry of Education, the National Universities Commission as also the Tertiary Education Trust Fund for their roles in the establishment of this unique, Nigerian Army technology-driven university.

Let me at this juncture specially appreciate His Excellency, the Executive Governor of Borno State, Alhaji Kashim Shettima, for graciously giving us this land of 5,000 hectres to build this great institution. My special thanks also go to His Royal Highness Alhaji Umar Mai Mustapha Aliyu, the Emir of Biu for his kind support towards the establishment of this university.

I will not fail to appreciate the Implementation Committee, the Nigerian Army University Biu Steering Committee and The University Transitional Governing Council headed by Maj Gen MA Efeovbokhan (rtd) who worked tirelessly to see that the establishment of NAUB comes to fruition. I also appreciate the Chairman of Fordmax Nigeria Limited, Mr Jack Rich, the NDDC, Total E and P, International Oil Companies and other organizations who have contributed immensely towards the smooth take off of this university. Last but not the least, I want to appreciate the prominent sons and daughters of Biu and Borno State at large for your warmth, hospitality and support to the Nigerian Army.