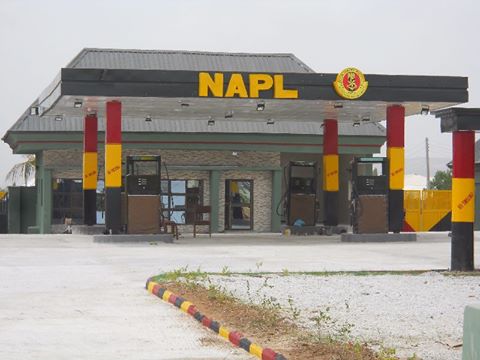 The Nigeria Army has on Friday 8 April 2016 commissioned its oil and gas filling station that was recently built in Minna , Niger state capital.

The filling which runs under Nigeria Army Property Limited (NAPL) is an 8 pump oil and gas station built along Bakungu bye pass Minna.

Chief of Defence Staff, General Gabriel Olanisakin who represented President Muhammadu Buhari as the special guest of honour during the event, said the establishment of the projects had made the Service optimum utilisation of its human and material assets into profitable business ventures towards improving the welfare and well beings of the Nigerian Armed Forces at large and their families as well as the general populace.

He stressed that the Company could also afford the Nigerian Army the opportunity to effectively engage all the arms and services in their various areas of specialisations to enhance service delivery.

General Olonisakin also told the gathering that one of the few priorities of the Buhari’s administration was the enhancement of the capacity of the Armed Forces to discharge their duties effectively.

“I am therefore particularly glad that this project which is being commissioned today is a step in the right direction. I therefore congratulate the Nigerian Army for this giant stride which is in line with the policy direction of the present administration,” he stated.

The President’s representative further assured the military that the government would not relent in providing the much needed support to the Armed Forces for efficient service delivery and effective discharge of their responsibilities.

Also, in his remarks at the occasion, the Chief of Army Staff, Lieutenant General Tukur Buratai, said the newly commissioned mega fuel service station was pacesetter in the current drive to reposition the Nigerian Army for contemporary realities.

He explained that the project was in line with his vision of having a professionally responsive Nigerian Army in the discharge of its constitutional roles, emphasising that the Service had also diversified attention into areas that would improve the welfare and well-being of the Nigerian Armed Forces personnel, their families and the civil populace.

He also thanked President Muhammadu Buhari for his continuous support and for standing solidly behind the Nigerian Armed Forces in combating the insecurity in the northeast.

Lt. Gen. Buratai also told the gathering that the Nigerian Armed Forces had made appreciable progress in the fight against terror and implored Nigerian Army personnel to continue to remain professionally responsive and loyal to the Constitution of the Federal Republic of Nigeria.

The fuel service station has four pumps for petrol and one each for Diesel and Kerosene including a Supermarket and a Mechanic Workshop.

It will operate a 24-hour service daily and the Management of NAPL said the Minna Oil and Gas station is one amongst the ones NAPL Mega Stations the Army intends to establish across the 36 states of Nigeria and a super mega station of 56 pumps in Abuja, the Federal capital territory.

Highlights of the event was the unveiling plaque and cutting of tapes, which was followed by a symbolic buying of fuel by the Chief of Defence Staff who paid the Chief of Army Staff as the owner of the filling station.

The CDS had also laid foundation stone for the take off of the construction of the Gas Plant situation behind the filling station.