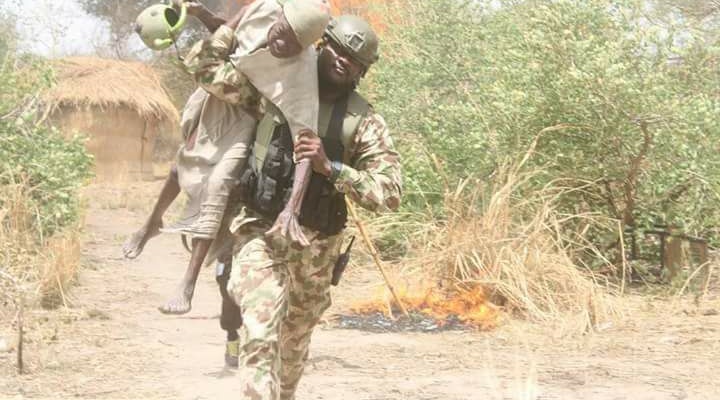 Troops of Operation Lafiya Dole have rescued an aged man who was held hostage by element!s of Boko Haram Terrorists group in the remote village of Gobara in Gwoza Local Government Area of Borno state.

In a rare display of bravery and humaneness, a Platoon Commander of the 192 Battalion, Lieutenant Asajwun Ahmadu rescued and personally carried on his shoulders, the feeble aged man who had been caught up in the exchange of fire between the troops and the insurgents during an offensive to clear insurgents out of their hideout in Gobara on Friday 11 May 2018. The rescued man is currently receiving medical attention at the 192 Battalion Medical Reception Centre.

During the advance to conduct the offensive at Gobara, the Counter insurgency troops uncovered and successfully detonated three Improvised Explosive Devices (IEDs) buried by Boko Haram insurgents along the axis of advance at Damboa bridge, Fadakwe and Fadakwe Christian respectively.

The troops have also exploited further to clear Shiyadawe, Shiyadawe Bulama and Shiyadawe Fulani, all in Gwoza Local Government Area of Borno State.